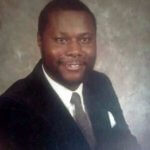 Osmund Orlando Epps, Sr passed away on November 30, 2016 at MCV Hospital surrounded by loved ones.

Osmund was born on January 6, 1958 to George and Delores Epps. He was the eldest of 3 children. Osmund was mostly raised in Richmond, Va’s Northside community of Highland Park. He was a chef and worked several years in well-known hotel restaurants and grills in Virginia and Ohio. He also worked for the Cleveland Yacht Club, Cleveland Clinic Hospital, Stonewall Cafe and the Anna Belle Lee cruise ship to name just a few. His cooking repertoire was broad. His food was always delicious. He believed in hard work and using your passion to achieve success. He was very animated in the kitchen. He was the captain in the kitchen. He taught and motivated many to enjoy the culinary arts. He would teach a life lesson with a quote like, “Tartar sauce, Tartar sauce all over the world!” It means it’s all the same everywhere!

Osmund was not just a chef. He was also a history buff and was fascinated by the animal kingdom. He loved history! He remembered everything. He also loved animal kingdom theme shows. He watch the animals for hours. His beloved son Osmund Orlando Green preceded his father by just four months. Osmund Orlando Epps, Sr. had the difficult task of preparing a funeral while enduring his own declining health.