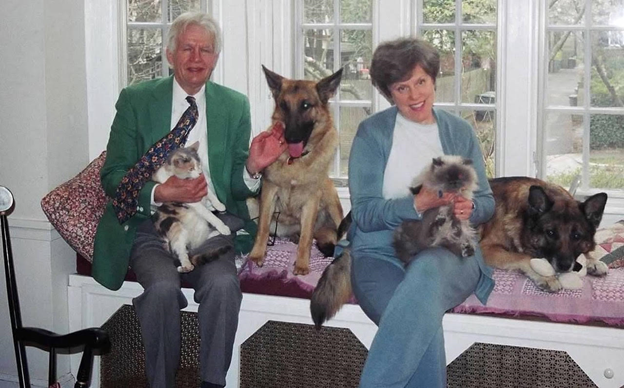 Alice Lucan was born in Washington, DC, daughter of a librarian and a Washington newspaper reporter. Writing, editing, getting access to, and distributing information were constant themes in her life.

During her “first career” as a broadcast news reporter, Alice lived in several different cities and enjoyed aspects of every place she lived. But she was and always considered herself a “Native Washingtonian.” After many years in Washington, DC, she, and her husband Bob Lucan, moved to Crozet, Virginia, ultimately retiring there.

After ten years as a broadcast news reporter, Alice started law school at Cleveland State University’s Marshall College of Law. Eleven days after graduating with her Juris Doctor, she went to work in the Law Department at Gannett Co., Inc., as staff attorney, assigned to deal with editorial legal issues. She worked for ten years at that great company, helping with the “launch” of USA TODAY. When she left Gannett, Alice was an Assistant General Counsel.

Alice was a tenacious trailblazer in her field, and she accomplished much in mostly male-dominated fields. She mentored many young women, encouraging and inspiring them to realize their dreams. Her passion paved the way for future success for working women.

One could not think about Alice without thinking about her beloved German Shepherds, and the kindness she showed to all animals. For more than forty years, she and Bob had several incredible dogs that were full members of the family. Always well-behaved and smart, they fit right into the world of intellect and academia that Alice created in her home.

Survivors include her sister, Carol Neff Grayson; her aunt, Leta Colman Fitzhugh; dozens of cousins; and members of her husband’s family.

She was preceded in death by her beloved husband, Robert Mark Lucan; and her parents, Alice Fitzhugh Neff and Edwin DeFrees Neff.

The funeral will be held at noon on Saturday, November 20, 2021 at Olivet Presbyterian, 2575 Garth Road, Charlottesville, VA 22901. A committal service will follow immediately outside in the Olivet Presbyterian Cemetery in the same location as the church.

Donations in lieu of flowers may be made to Virginia German Shepherd Rescue or Charlottesville Albemarle SPCA.