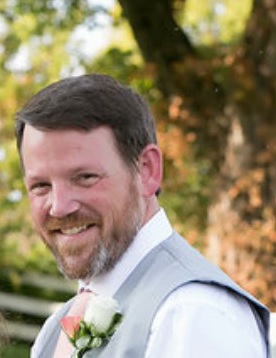 He was a loving father, husband, son and brother, and his passing leaves a gaping hole which will never be filled. Ashley was born August 3, 1975, into a Navy family in Jacksonville, FL. Through his youth the family lived in Nova Scotia, Canada; Virginia Beach; and Brunswick, ME, where he developed his love for fresh-caught lobsters. In 1991 the family returned to Virginia, settling in Hampton. After graduating from Hampton Roads Academy, Ashley headed west to Radford University, where he graduated with a BA in marketing in 1998. Shortly afterward, he signed on with Capital One in Richmond, where he recently celebrated his 20-year anniversary.

He was predeceased by his mother, Linn T. Scott, and is survived by his loving wife Amy Glover and daughter Lily; son Halsey; father R. Peter Scott of Hampton; brother Alexander Scott of Richmond; sister Mandy Scott of Berkeley, CA; father-in-law Chuck Glover of Chesterfield; mother-in-law Brenda Glover of Henrico; brother-in-law Jeremy Glover and wife Lacey of Chesterfield; brother-in-law Stephen Glover and wife Beth of Henrico; his brother from another mother Alexander White and wife Heather of New Kent; and a myriad of aunts, uncles, cousins, nieces and nephews.

He was, quite simply, an amazing man. He was a generous and loyal friend, a hard worker and a selfless provider. He could often be found in his wood shop, where he had the right tool for any project, or in his boat on his favorite lake, teaching his son the intricacies of bass fishing. He loved playing soccer and following Manchester United, and was an avid outdoors man who enjoyed camping with his family. While his loss – far too soon – will be mourned deeply, his family and friends are forever grateful for the time we had with him.

A service will be held from 4 to 7 p.m. on Friday, Oct. 30, at Affinity Funeral Service Richmond Chapel, 2720 Enterprise Parkway, Richmond, VA.

In lieu of flowers, donations can be made in his honor to the Colorectal Cancer Alliance.