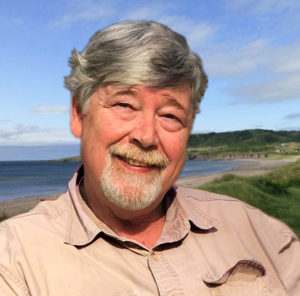 Brent Drewry Birchett, age 69 of Bon Air, Virginia passed away on Friday, November 22nd, 2019. Born in Hopewell, Virginia, Brent graduated from Hopewell High School in 1969 where he was member of Gamma Delta Psi fraternity and played football for the Hopewell Blue Devils. Brent was also an alumnus of the University of Richmond where he earned a Bachelor of Arts degree in Economics in 1976. He was preceded in death by his parents, Thomas Drewry Birchett, Jr. and Vernice Clark Birchett of Hopewell.

Brent loved dogs, hunting, fishing, and being outdoors. His favorite pastime was going to his grandson Gates’ soccer, basketball and flag football matches and being his granddad-coach. He loved cooking, grilling, and spending time with his family and friends, especially at outdoor gatherings. Brent was also the historian of the Birchett family. Once he retired, he researched, gathered, and shared the information and photos with all the family, making connections with Birchetts across the US and overseas. Prior to retirement, he worked at SunTrust Bank and then as a contractor for TD Bank of Maine.

He is survived by his daughter Courtney Birchett Lawson and husband S.G. of Powhatan and their children, his grandson and granddaughter Gates and Cabell Lawson; his brother Brad Thomas Birchett and wife Stacie of Richmond; his aunt Louise McLauchlin and his uncle Robert Shornak of Hopewell; his former wife and good friend Betsy D. Birchett of Midlothian; his devoted companion Patti Vest of Richmond, and numerous other cousins, family members and friends. The family is deeply grateful for the caring visits, calls, messages and acts of kindness over the past months.

A memorial service and interment will be held at 11AM on Friday, December 6th at Merchants Hope Memorial Gardens in Prince George, Virginia with a reception celebration afterward.

In lieu of flowers, memorial contributions may be made in memory of Brent D. Birchett to the James River Association, 211 Rocketts Way, Suite 200, Richmond VA 23231 or online at https://thejamesriver.org/join/. Select the One-time Payment tab.