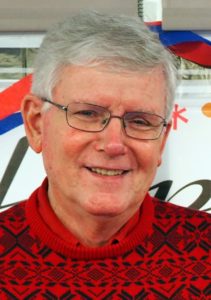 During his 33 years of living in Richmond, he worked at the Virginia Farm Bureau, Lowe’s Corporation, and FedEx Corporation. He was a veteran of the US Army and a graduate of Virginia Commonwealth University with a BS in Business – Information Systems. Bruce daily enjoyed and succeeded at working crossword puzzles and Sudoku. He enjoyed gardening, cooking, watching sports, golfing, fishing, music, and singing. He was a huge fan of the USC Gamecocks. He was very devoted and attentive to his Labrador Retrievers. He was very proud of Suzy who achieved her AKC Master Agility Championship (MACH) title as well as other titles. He was also very proud that he trained and titled Lizzy to attain an AKC Tracking Dog (TD) title.

In lieu of flowers a memorial contribution may be made to the American Heart Association/American Stroke Association, PO Box 3049, Syracuse, NY 13220.