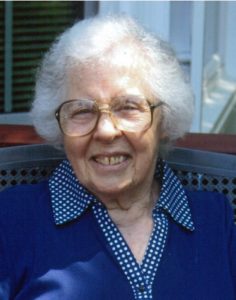 Mrs. Benning was active for many years in the Vestry and ECW of the Church of the Annunciation in Oradell New Jersey, and as a volunteer at Pascack Valley Hospital Westwood. She also worked as a bookkeeper for Schaefer’s Gardens and for Dr. Paul A. Insolera. While living in Richmond, she attended Monument Heights Baptist Church and was a member of the Dorcas Sunday School Class.

The family would like to express our thanks to the entire staff of Our Lady of Hope, Christopher Center, especially to nurses Vesna and John, as well as the many CNAs, for their kind and compassionate care extended to our mother.

A memorial service will be held at 2 PM on October 26th at the Church of the Annunciation in Oradell, NJ.