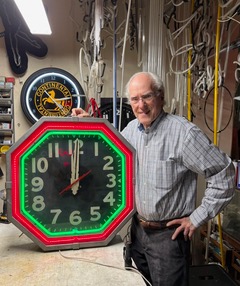 Charles Douglas Solyan, age 79, died peacefully with family by his side on February 21, 2022, of Covid complications.  Doug was born on September 29, 1942 in Sharon, PA to Charles and Frances Solyan. The family moved to Hopewell, VA where he graduated from Hopewell High School.  He moved to Richmond in 1971. He attended Richard Bland College then transferred to VCU where he graduated with a Bachelor of Arts degree in economics in 1973.

Doug was preceded in death by his parents and his nephew, Robert Allen McNeece. He is survived by his wife of 31 years, Deborah Conley Solyan. He is also survived by his sister Pamela Solyan McNeece (Michael) of Jacksonville, FL; brother, William F. Solyan (Sandi) of Rancho Cucamonga, CA; cousin, Ron Coleman of Richmond, VA and numerous cousins throughout the United States.

Doug lived a colorful and fulfilling life. He traveled to many different countries and throughout the United States, made life long friends, and became an accomplished neon artist and bender, becoming well known in the Richmond and surrounding areas.  Doug had a lifelong love for Weimaraners, owning several throughout the years. He had an appreciation for eclectic things in life such as tarantulas, fish, motorcycles, hotrods, and RV road trips.  He enjoyed playing chess, cards, video games, doing Sudoku’s, visiting art museums and was an iconic collector of neon clocks, unusual items and memorabilia.

Doug founded Olde Towne Mirror and resilvered thousands of antique mirrors. Upon its closing he owned and operated Uptown Neon for 35 years. Many Richmond area restaurants, bars, and businesses have Doug’s neon in their establishments.  He also made neon artwork for private individuals, movie sets, and collaborated with numerous artists. He was kind and generous, gladly sharing his love of neon with all interested customers who came into his shop. He mentored several people who were enthusiastic about learning the neon trade.

Masks are required in all church buildings at this time.