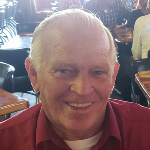 Charles Edward Hudson, 77, of Glen Allen, VA, passed away peacefully on October 30, 2020, after a short battle with cancer.

Charles knew no strangers. To meet him was to become an instant friend. After retiring from Brookfield Machine & Welding after nearly 40 years of employment, he began working for RMC Events where he loved parking cars, talking to vendors, and walking the halls of the Siegel Center. He also spent a great deal of time volunteering as a greeter and bus boy at Little Szechuan Chinese restaurant. Charles grew up in the Masonic Home of Georgia in Macon, and was a member of Glen Allen Lodge #131. He was a veteran of the Navy where he served aboard the USS Forrestal.

Services will be held sometime in the spring. Donations can be made to the Masonic Home of Virginia.