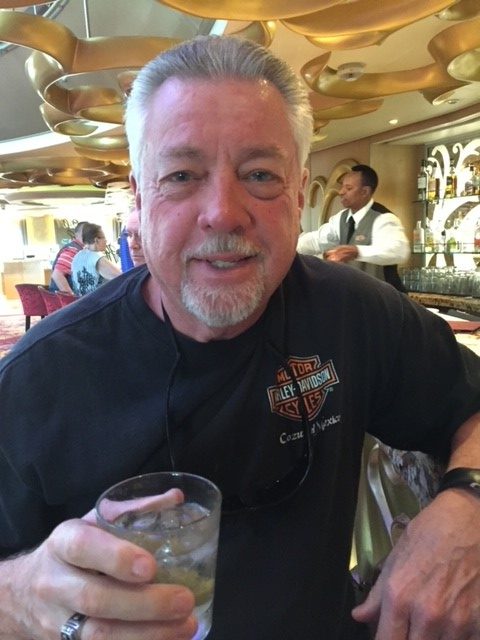 Charles P. Kalopodes Jr., AKA Chuck, Age 73, of Goochland, VA passed away peacefully in his sleep on October 27, 2021, at home with his wife and daughter by his side.  He was preceded in death by his father, Charles ‘Charlie’ P Kalopodes Sr.; and mother, Nell Allen Knight.  He is survived by his wife of 25 years, Nancy Kalopodes; and daughter, Mary Kalopodes-Saunders (Mike); and grandson Dylan; and 2 stepsons, Chad Mawyer (Sarah), and Ryan Mawyer, (Megan); and granddaughters, Natalie, Alleigh, and Annabelle.

Chuck had a passion for motorcycles, and since retiring, would often take daily rides throughout Virginia.  He was also an avid cruiser, and he and his wife enjoyed many trips to the Caribbean.  Chuck enjoyed exercising, and quite impressively would walk 5 miles daily, to get his day started.  But mostly he loved interacting with his friends and family, and often talked fondly of those he met at the YMCA, Harley Shop, and interactions he had at the various breweries.  Chuck also enjoyed watching his grandkids activities and having his family over for gatherings.  He was a great cook and could fix almost anything, but preferred a great hamburger to almost anything else.

Prior to retirement, Chuck worked at Pepperidge Farms for 25+years, and won numerous awards, included Top Distributor for the East Coast Region from 1987 to 1993.  Chuck had an energetic personality, and he never met a stranger.  He was always quick with a joke or a good story.  He loved to laugh and make other feel at ease.  He was truly one of a kind, with a positive ‘kickass’ attitude, coupled with a tender heart. His was a cherished friend to many.

A Celebration of Life will be held on Sunday, November 7, 2021 beginning at noon, with memorial at 1pm, located at the Harley Davidson of Richmond, 12200 Harley Club Drive, Ashland 23005.  If you cannot attend, the family requests you jamming out to George Thorogood “Bad to the Bone”, and raising a cold beer (preferably Sierra Nevada) in Chuck’s honor.  In lieu of flowers, please send donations to Wounded Warriors in Chuck’s name.