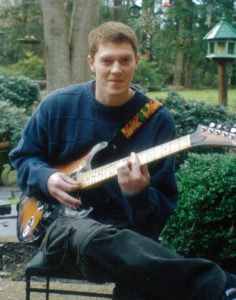 Chris was born January 8, 1974 in Charlottesville, Virginia and moved with his family to Midlothian as a toddler.  He attended Midlothian High School and graduated from Open High School in Richmond.  He attended John Tyler Community College and Lynchburg College, never fully embracing academia but always excelling in the areas of music and creative writing.  He won a poetry prize at John Tyler.  He played piano as a youth and later soothed his soul through the guitar.  Music was Chris’s salvation—his “church,” as he called it.  He loved all kinds of music, but his special love throughout his life was the Grateful Dead.  Their music, especially the lyrics, touched him as no other; it soothed him in times of frustration or hopelessness and truly brought him sheer joy at other times.  He loved to dance and get lost in the songs; he simply could not survive without his music. Chris was a kind and gentle soul, not only a talented musician but also a gifted poet, and a believer in “cosmic connections.”  His written words were truly insightful, and he used them to express his joy and his sorrow, his hopes and his anguish, as well as the pure love he held for his family and friends, who were consistently impressed and even amazed at his “way with words.”  He generously shared his talent by helping friends to write letters or poems to their own loved ones. Chris established a business called Nodwear, through which he tried to share his passions about music and life with original printed designs and special wording on clothing that he sold at concerts around the country.  He was at his happiest while doing this, but his demons relentlessly intruded on his dream.

In addition to his parents, Christian is survived by his loving brother Everett (Ben) Howerton III of Atlanta; his stepfather Charles Sommardahl Sr. of Richmond; his and his father’s special friend, Brenda (Twiggy) Munford; his beloved nieces, Brooke, Megan, and Rachel Howerton of Atlanta, as well as their younger brother Mehrik McCurley; his aunts, Betty Bibb, Virginia Watson, Harriett Edmunds (Prescott), and Barbara Saunders, all of Lynchburg; his uncle Allan Howerton (Rebecca) of Lynchburg; his stepbrothers, Charles (Camp) Sommardahl (Laurie) of Lynchburg, David Sommardahl (Michelle) of Midlothian, and Brian Sommardahl (Ashley) of Richmond, as well as their children; and a host of cousins.  Chris was predeceased by his grandparents, Elizabeth and Meredith Plunkett and Lois and Everett Howerton, all of Lynchburg, as well as his maternal uncles, Meredith, Warren, Frank, and Stephen Plunkett. Chris loved children, delighting particularly in the antics and activities of his nieces.

His family and friends are heartbroken that he suffered so long without achieving his dream of having children of his own.  He spoke of his Grateful Dead Family and often signed his Facebook posts “Forever Family, Forever Grateful.”  A celebration of Chris’s life will be held at Affinity Funeral Service (2720 Enterprise Pkwy, Richmond, Virginia) at 3 p.m. on Tuesday, December 3, 2019, followed by visitation with the family until 5 p.m.  His friends are encouraged to feel free to wear their Grateful Dead or similar clothing.  A graveside service for interment of Chris’s ashes will take place at Spring Hill Cemetery in Lynchburg, Virginia on Saturday, December 14, at 2 p.m.  Friends unable to attend the Richmond celebration are welcome to join the Lynchburg activities instead.

If you would like to remember Christian with a memorial contribution, the family requests that you please consider donation to an addiction recovery organization of your choice.