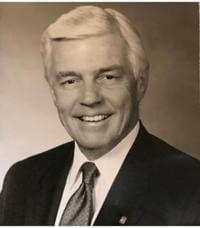 KURTZE, Clark, age 82, of Glen Allen, Va., passed away Saturday, January 12, 2019. He was born January 22, 1936, in Sioux City, Iowa. He was preceded in death by his mother, Mary June Wadhams Kurtze; father, Robert Henry Pelton; brother, Allen Kurtze; and son, Chris Kurtze. Clark spent most of his youth in Chicago, enlisted in the Army at 18 and served four years. He was stationed in Austria and Italy, where he served as an MP and aide to the General. He supported his family by selling men’s clothes at Jacobs & Levy, attending college at night. He graduated from RPI in 1963, and began a 30-year career with Reynolds Metals Company where he worked in Sales, Training, Management Development and finally as VP, Reynolds Aluminum Sales and Director, Customer Development and Environmental Affairs, Consumer Products Division. Clark retired at age 57 and enjoyed selling men’s clothes at Franco’s for many years. He and his wife, Donna, lived in Williamsburg and later moved to Glen Allen. They spent many wonderful weekends at their condo in Virginia Beach. He was a gifted salesman, a great communicator and public speaker, always the best dressed man in the room and enjoyed shopping for cars, houses and art. Later in life you would find him sitting in his chair at home, reading the Wall Street Journal, Cigar Aficionado or the local paper. He is survived by wife, Donna Massei Kurtze; his daughters, Diane (Bob, Reid and Karley, Davis) McClearen of Alpharetta, Ga. and Cindie (Scott, Brett and Brittany, Madalynn and Brinley, Austin) Valentine of Manakin Sabot, Va.; and stepson, Matthew (DeeDee, Bayleigh and MJ) Rogers of Haymarket, Va. In lieu of flowers, the family requests that donations be made to St. Jude Children’s Hospital, www.stjude.org/donate. Memorial services will be held at Affinity Funeral Service, 2720 Enterprise Parkway, Richmond, Va., on Saturday, January 26. Visitation at 11 a.m., memorial service at 12 p.m.