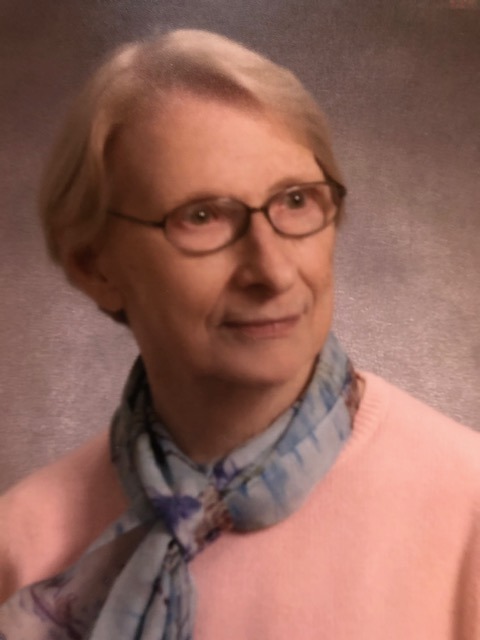 Dolores Bell Ramos Gravatt, of Richmond, Virginia, died peacefully at the age of 90 on February 14, 2021, at Cedarfield, her home for the past 25 years. She was proud of being a “Cedarfield Pioneer,” having moved in when the facility first opened.

She was born in Richmond to Richard Stuart Bell and Martha Dixon Bell, and graduated from John Marshall High School in 1947.

For many years Dolores was a member of Battery Park Christian Church in Richmond.  She was a Certified Professional Secretary and held several positions as confidential secretary prior to her retirement. She had a great love of books and reading, and would take on crocheting and quilting projects from time to time.

Dolores was predeceased by her husband Basil E. Gravatt of Bowling Green, Virginia. He had an extended family of nieces and nephews, of whom she remained very fond.

She is survived by her brother Charles Edward Bell (Charlie), his wife Betsy, and their children and grandchildren; and by four children: Bette Ramos White; Peggy Ramos Nottingham and her husband Butch; N. Haskins Ramos, Jr. and his wife Leigh; and Evelyn Ramos Whitley and her partner Tim Sage. She is lovingly remembered as “Mamoo” by her grandchildren:  Laura Parsley, Jerome Nottingham, Errin Sullivan, Claire Rotruck, Sara Whitley, Becky Herndon Hogge and Douglas Herndon; and 11 great grandchildren. She is also fondly remembered by two dear friends, Jay Whitley and Raymond Brooks.

During her retirement years, she volunteered at St. Mary’s Hospital, St. Mary’s Hospice, University of Richmond Women’s Resource Center, and Cedarfield, where she applied her interest in creative writing by regularly contributing to resident publications.

A private service will be held at a later date. In lieu of flowers, contributions in her memory may be made to the Dementia Society of America (www.dementiasociety.org).

The family would like to express their appreciation to the care team at Heartland Hospice and to the dedicated staff of Cedarfield for their care and support. We will always appreciate the loving attention she received throughout her time there.