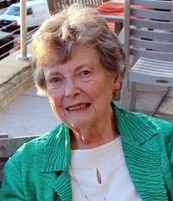 Called Eddie throughout her life, she was born on May 23, 1932 in Avonmore, Pennsylvania. Her family later moved to Catawissa, Pennsylvania and when she was age 13, to Winter Park, Florida. In 1954 she graduated from Grove City College where she majored in English, Speech and Drama. It was there that she met her future husband Barry Westin, of Buffalo, New York. In 1955 they were married and lived in Rapid City, South Dakota where Barry was stationed while serving in the U.S. Army. Having begun a teaching career while in Pennsylvania, Eddie continued to teach during their time in Rapid City. Upon completion of his service they moved back to Grove City where their first daughter Marta, was born. They moved to Durham, North Carolina where Eddie put her husband through graduate school by teaching and where in 1960, their second daughter, Kara was born. In 1961 they moved to Richmond, Virginia where in 1962 their son, Walter was born. All three children survive along with six of her grandchildren and one great-grandchild. She was preceded in death by her parents; as well as one granddaughter. Eddie worked part time in the University of Richmond’s Office of Admissions while raising her family. She attended Epiphany Lutheran Church where she remained active throughout the years teaching Sunday school and serving on the church council. She was active in several University of Richmond organizations including the Faculty Wives Club.

A memorial service will be held at Epiphany Lutheran Church, 1400 Horsepen Road, Richmond, Va. 23226 on Saturday, November 2 at 11 a.m. with inurnment in the Epiphany columbarium and reception immediately following.

The family requests that in lieu of flowers, contributions be made to Brenna’s Scholarship Fund at The McShin Foundation, 2300 Dumbarton Road Henrico, Virginia 23228 or to a charity of your choice.