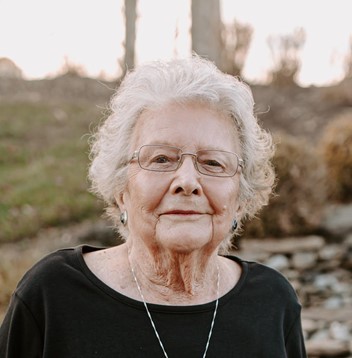 Betty was born in Toronto, Canada in 1932 and moved to Lynn, MA when she was four years old. She received her BA in American Civilization from Pembroke College in Brown University in Providence, RI in 1953.  She met Robert “Bob” Anderson Hodnett during a holiday break, and they were married several years later.  Bob’s career as a naval officer provided them the opportunity to travel. Their daughter, Jennifer was born in Monterey, CA and their son, John was born in Norfolk, VA. As a naval family, they lived in Cape Canaveral, FL, Annandale, VA and Rio de Janeiro, Brazil before moving back to Virginia. Upon Bob’s retirement in 1974, they moved from Dahlgren to Richmond, VA, where they made their home. Betty moved to Discovery Village in Richmond, VA in 2016 as one of the community’s first residents. She served over 35 years as a volunteer at the Johnston-Willis Hospital gift shop, and was an avid bridge and Rummikub player.  Most of all she enjoyed sharing social hour and dinner with her “posse” where a good time was had by all!

Grieving her loss are her daughter, Jennifer Tektiridis (Minas), son, John Hodnett (Geri), grandchildren Casey and Luke Hodnett and step-grandchildren Marshall and Amanda Weakley.  She was preceded in death by her husband, Cmdr. Robert A. Hodnett, USN (Ret.).

A private interment will take place at Quantico National Cemetery. In lieu of flowers, donations may be made in Betty’s name to the charity of your choice.