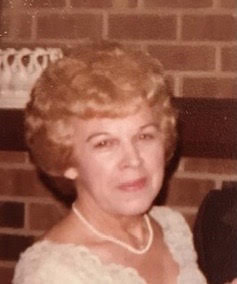 Evelyn worked at DuPont during World War II.  She married W. E. “Wally” Lancaster in 1944.   They bought their first home on Chase Street where they welcomed their two sons.  They bought their second home on Durvin Drive in Cavalier Park in 1959, where they lived and continued raising their two sons. Evelyn lived there for 61 years.   She had the ultimate “green thumb.”  Her yard was a floral showcase.  She was a member of the Cavalier Park Garden Club, where she served as President for several years.

After the children were grown, Evelyn went to work for Henrico County where she managed the cafeteria at Skipwith and Jackson Davis Elementary Schools until she retired in 1988 with 25 years of service.

She was a member of St. Bridget Catholic Church for over 78 years.

Evelyn was an excellent cook and homemaker.  Her home and family meant everything to her.  Her door was always open to friends and family at any time, day or night, especially during the Holidays.  You knew you were going to be welcomed with open arms and were guaranteed to be served something homemade and delicious.  We all loved her and will miss her dearly.

A special thank you to the staff and nurses at Spring Arbor of Richmond Assisted Living Community and at The Cottage Memory Care Unit.  We would also like to thank all the nurses of At Home Care Hospice for their love and compassion.  A special thanks to Carole and Darlene for their weekly visits.

The family will receive friends from 5:30 to 8 pm Tuesday, July 20th at Affinity Funeral Service, 2720 Enterprise Pkwy, Richmond, VA 23294.  A Mass of Christian Burial at 10 am Wednesday, July 21st  at St. Bridget Catholic Church. Interment to follow in Greenwood Memorial Gardens.  In lieu of flowers, contributions may be made to a charity of your choice.