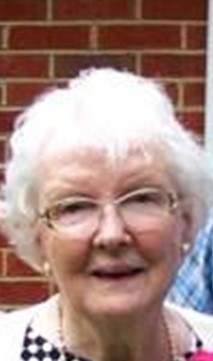 Frances Forrester Trenka of Richmond, VA, passed away peacefully in her sleep at the Hermitage Richmond on May 18, 2022 at the age of 98.

Frances Elizabeth Forrester was the only child of Thurston Mornington Forrester (“Bud”) and Inez Corsa Forrester, born at home on August 16, 1923 in Reedville, VA.  She lived a carefree childhood in the small peninsula town – often playing outdoors, with friends, and reading on Sunday afternoons.  There she was raised in the faith at Bethany Methodist Church. She attended Reedville School through 11th grade (senior year).

Frances married Charles Robert Trenka in DC in 1945; they celebrated their 76th wedding anniversary on July 31, 2022.  Early on they lived in DC, at Knox College in IL, and WVA.  Frances was a sought-after secretary and worked as such in DC as a young woman – and later in Roanoke and Richmond, VA. She loved God, her family and church family – and faithfully served all with love. She was an avid bridge player, cook, seamstress and grandmother!

A memorial service bearing witness to the Resurrection of Jesus and celebrating Frances’ life will be held at Crestwood Presbyterian Richmond (6627 Jahnke Rd) on Saturday, June 4, at 2:30pm, followed by a reception in the Fellowship Hall.  Rev. Dr. Matt Merrill will preside.

The Affinity Funeral Service of Richmond is handling arrangements. Frances will be interred at the Roseland Cemetery in Reedville, VA at a later date. In lieu of flowers, donations may be made to Crestwood Presbyterian Church. The family wishes to thank Dr. W. Clifford Hendrix and Rev. Dr. Robert Burns for their care over the years, and more recently the staff of the Hermitage Richmond.