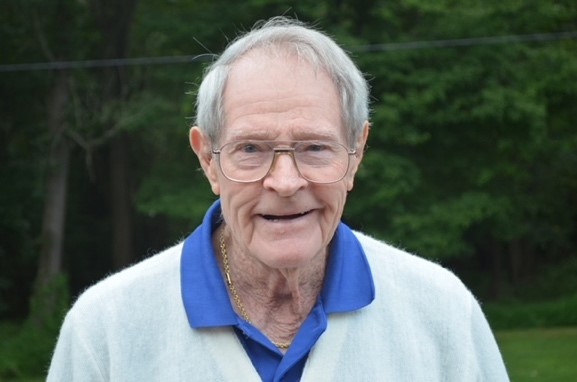 George William “Bill” Summers, 94, of Richmond, VA, passed away on Oct 29, 2021. Bill was born Nov. 29, 1926, in Baltimore, MD to George Albert Summers and Helen Rosalie Wilson. He was raised in Baltimore, where he graduated from Baltimore Polytechnic Institute, and subsequently attended the University of Baltimore.

Bill served as a corpsman in the U.S. Navy from 1945-1946. In 1949, he wed his sweetheart and childhood neighbor Doris May Wright and together they had two daughters, Beverly and Barbara.

In 1957, Bill landed his dream job as a stockbroker at John C. Legg and Company in Baltimore. He enjoyed a long and successful career at Legg Mason, developing lasting relationships with clients and colleagues alike. In 1989, he semi-retired to the Hideaway Country Club in Ft. Myers, FL, where he continued as a stockbroker until 1997 after his daily round (or two) of golf. Bill lived at the Hideaway for 30 years, where he was known among friends for his competitive nature ‒ be it on the golf course, at the bridge table, or consistently selecting winning stocks.

Bill continued to pursue his passion for golf into his 80s, netting 11 holes-in-one over the years. He traded equities into his 90s, enjoyed serenading others with oldies like the Rat Pack and Bobby Darin, and rarely missed his evening dirty vodka martini (after the closing bell, of course). He also loved to travel, sing, and dance, occasionally all at once. He moved to Richmond, VA in 2019 to be closer to family.

Bill was predeceased by his parents and is survived by his former wife and dear friend Doris Benson, daughters Beverly Cuyler and Barbara Summers, grandchildren Jennifer Heil, Rebecca Stein, and Matthew Chodkowski, and four great-grandchildren.

Private memorial services will be held at a later date. In lieu of flowers, please send donations to hospice service Affinity Care of Virginia, https://affinityhealthmanagement.com/donation/.