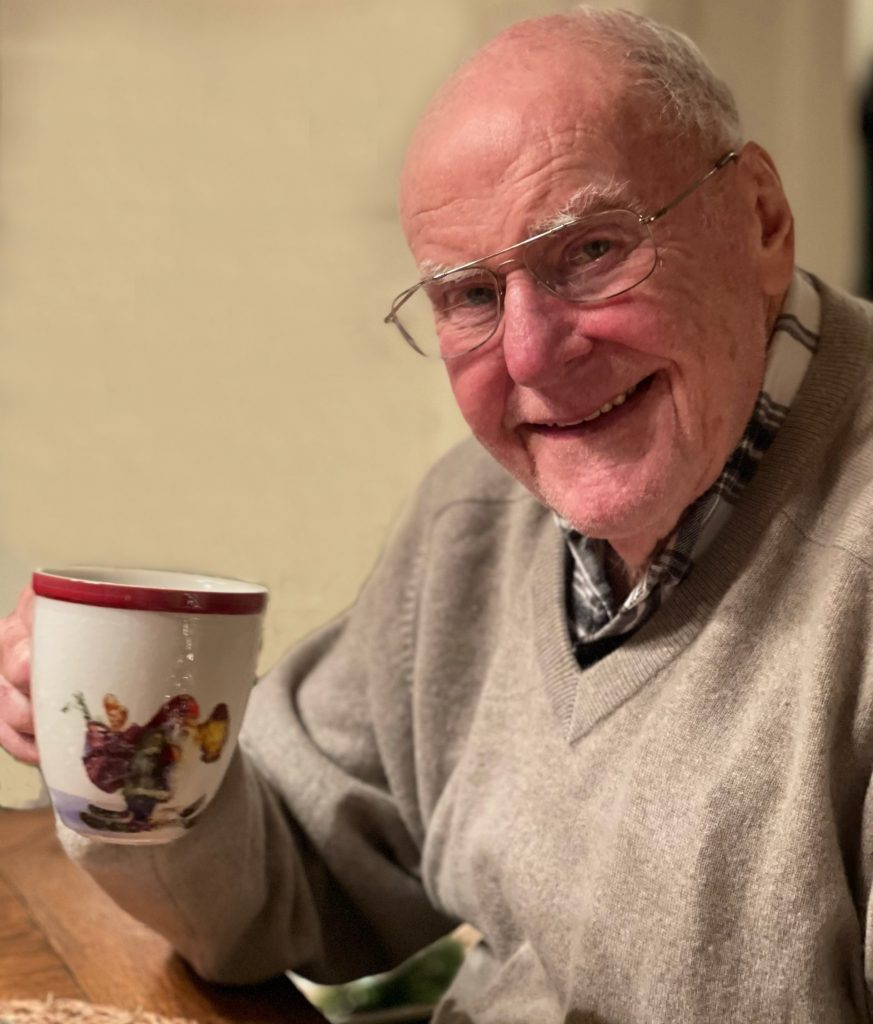 Howard Richard Gould, MD (also lovingly known as “Howie”, “Uncle Howie”, “Papa”, “Grandpa”, and “Doctor Gould”) died peacefully at home in Midlothian, VA, on October 20, 2021, with Barbara Anne, his beloved wife of 65 years, by his side. Anyone who knew him likely heard him quote his favorite Shakespeare title “Much Ado About Nothing” when he thought there was an unnecessary fuss being made about something or other. But we feel we should make a lot of “ado” about this exceptional son, husband, father, uncle, friend, physician, veteran, mentor, teacher, scholar, cabinet-maker, pilot and general handyman (but no plumbing, thank you) that bears notice. So brace yourself, it’s going to take more than a few written lines to do justice to this incredible life.

Born in 1931, Howie was the only child of John Howard and Mary Margaret Gould.  Raised in Astoria, NY, from humble beginnings, his proud Irish parents encouraged and expected academic success, and young Howie did not disappoint. At the age of 12, a mishap that included roller skates and a Tastee delivery truck landed him in the hospital for 3 months with a leg in traction. Despite this setback, and with the help of a classmate who delivered daily assignments to keep up with his studies, Howie still managed to finish #2 in his class, just behind his friend who had delivered the work, showing not only his strong work ethic but his excellent taste in friends. Soon after, he was selected to attend the prestigious all- scholarship Regis High School in Manhattan. At 14, he also began working for his father, an elevator engineer at Otis Elevator Co. in New York City.  Although he earned a decent wage, he always suspected his father made sure the job was rather unpleasant, hoping to encourage him to continue school and find a better career for himself.

It was a chance injury while at Regis that ultimately led to his career in medicine. After injuring his arm at school while playing basketball, he hopped on the subway back to Queens and went straight to Dr Jim’s, the family’s physician and dear friend. Howie was so impressed with how Dr Jim straightened and cast his badly fractured wrist that he made the decision to become a doctor.

From Regis, he matriculated to Fordham University and entered the Air Force ROTC program. He served as Captain of the drill team at Fordham and loved to share stories of their competitions. One of his favorites was the time they stole the show by performing their entire routine in complete darkness with glow-in-the-dark paint on their belts, pant legs and rifles. Another time, he led the team as they marched in New York City’s Saint Patrick’s Day Parade, singing the family favorite song “Harrigan” to keep in step.

He would wryly share that he “dropped-out of college” after completing only three years of undergraduate study at Fordham, since he was accepted at SUNY Downstate College of Medicine a year early. There he earned his medical degree, and it was during his time as a medical student that he met the love of his life, Barbara. It is rather ironic that they did not meet sooner, given they attended the same elementary school, attended the same church, and  had in fact lived within 2 blocks of each other throughout childhood. Within a couple of years they were engaged and then wed, but exactly who proposed to whom has always been a source of controversy, with Howie insisting that Barbara popped the question.

While Howie completed his studies and began his training in Radiology at St Vincent’s Hospital in Greenwich Village, Barbara kept busy with their ever-growing family.  His commitment to serve his country continued as a Captain in the US Air Force, stationed at Loring Air Force Base in Maine and then heading abroad to Wiesbaden, West Germany, at the height of the Cold War. He left the service a decorated Major in 1965, at a time when housing was based on rank, not the size of the family. Raising six children in a 3-bedroom apartment proved to be a bit much. Thus, the family returned to stateside. Howie rejoined the staff at St Vincent’s Hospital and held leadership roles for his department as well as the institution for over decade. Meanwhile, the family grew to include nine children.

When the opportunity arose to further his academic career, with the added bonus of a much shorter commute, he accepted a position at the University of Wisconsin-Madison, leading the residency program and inpatient radiology services. After enduring five Midwestern winters, he was subsequently recruited to join the faculty at University of Tennessee-Knoxville, where he served as Chief of Staff. He received countless other accolades too numerous to mention throughout his career for scholarship, service and teaching. Upon retirement, he was bestowed the prestigious rank of Professor Emeritus for his distinguished service to the University.

From Knoxville, he and Barbara retired to their beautiful lakefront home at Keowee Key in Salem, SC.  For over 25 years, they always welcomed family and friends to share the refreshing lake and gorgeous sunsets. In 2013, they relocated to the Richmond, VA area, where they met new friends and neighbors in their Glen Allen and Brandermill communities. Over the last year, they have lived in the Midlothian home of one of their daughters, Eileen, and her husband Pablo, who have served as dedicated caregivers for Howie and Barbara in recent years.

After more than nine decades of this extraordinary life, the lessons Howie learned and taught are too numerous to recount, but there are those truisms — from the lighthearted to the serious — that might best illustrate the man and in turn, helped shape the character of his children and grandchildren:

Ernest Hemmingway said “Every man’s life ends the same way. It is only the details of how he lived and how he died that distinguish one man from another.” Howie was and is a man among men, distinguished in everything he ever did. From his very first job sorting hangers at Orbach’s Department store to his retirement from an illustrious career in medicine with the rank of Professor Emeritus, his extraordinary accomplishments are only surpassed by his humility.

Over the years, one of the roles he enjoyed most was being a grandfather to his 24 grandchildren. He loved taking them out on the boat on Lake Keowee, buying them ice cream, showing them how to fly his amazing model airplanes, and helping them build their own inventions and contraptions in his workshop. His generosity, work ethic, life-long learning, sense of service and justice, and his many other admirable qualities are his greatest legacy to his children and grandchildren.

Surely, a man of great faith and unimpeachable integrity, who lived a life of unwavering commitment to his wife Barbara, their nine children, 24 grandchildren and innumerable friends, colleagues, patients and students, should have no difficulty gaining entry and the gates of heaven will open and welcome him home.  He will finally be reunited with those who have gone before him, especially his beloved parents John and Mary, and his granddaughter, Maria Helene.

He will be deeply missed, and his loving, living and legacy will live on for generations in those he leaves behind. He is survived by his wife Barbara, his children Susan(Richard), Carolyn; Richard(Beth), Joanne(Richard), Anthony(Maria), Mary Jean, Eileen(Pablo), Laura and Margaret(David); and his grandchildren Kyle (Angela), Corey(Becca), Jessica, Anthony, Evan, Mackenzie, Colin, Anna, Christian(Alison), Matthew, Raylene(Zachary), Michael, Lily, Howard, Charles, Abigail, Lauren, Beatrice, Lydia, Janelle, Grace, Isabel and Natalie.

The family would like to express their deep appreciation for the love and support from family and friends particularly in Howie’s final months. Your visits brightened his and Barbara’s world.  The family is additionally grateful for the care provided by the team at Amedisys Hospice; Faithful Servants Home Health Aides: Nikki, Karen, Sharn and Glenn; Dr Minh Tran; and Father Dan and Deacon David from St Michael’s the Archangel Catholic Church.

A memorial gathering will be held on Sunday, November 14, 2021 from 3-5 PM EST at Affinity Funeral Service in Richmond, VA. The second hour of the gathering will be an opportunity for family and friends to share remembrances of Howard; that portion will also be live-streamed for those who cannot attend in person (Click here to view the live-streamed service for Howard Richard Gould.). A funeral mass will be celebrated on Monday, November 15th, 2021, at St Michael Catholic Church in Glen Allen, VA at 1:30 PM EST, followed by interment and a reception. The funeral mass will also be live-streamed and accessed at www.saint-mikes.org/livestream.   An additional celebration of his life planned for a later date in the New York City, details will be shared once the date and time are determined.

The family asks that any donations in his memory be made to two organizations he cared deeply about:

Regis High School in NYC, the all-scholarship Jesuit high school he attended and where was inspired to pursue a career in medicine. Please ask that the donation be earmarked for the Howard & Barbara Gould Scholarship fund. Donations can be mailed to James Kennedy, VP for Development, Regis High School, 55 E. 84th St. NY, NY 10028 or made online at https://www.regis.org/give/donations.cfm?type=af

SUDC (Sudden Unexplained Death in Childhood) Foundation, an organization that promotes awareness, advocates for research, and supports those affected by the sudden unexpected or unexplained death of a child, in memory of his cherished grand-daughter Maria. https://https://sudc.org/howardgould/