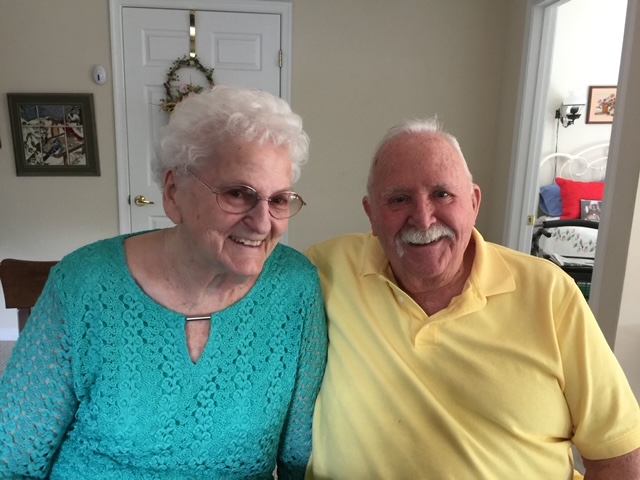 After attending a year of college, Gene moved back home and by chance, met Barbara in a local “watering hole” in a small town in Kansas just over the Nebraska state line. When it came time to drive home, she discovered she had a flat tire and he changed it for her. As Barbara would say, after “running around together” for two years they married on April 16, 1950.  They started their family in Falls City and had five children, five grandchildren and nine great-grandchildren.

Gene enjoyed all things mechanical, was a “hands on” person and was accomplished at fixing most anything that crossed his path. He worked hard to support his family usually having more than one job at a time and sometimes as many as three or four. Barbara was extremely resourceful and worked diligently raising their children and making ends meet. She enjoyed decorating their homes, entertaining, playing cards and being with family and friends. Together they started Miller’s Refrigeration & Repair in Falls City, Nebraska in 1967 doing commercial refrigeration, air conditioning and appliance repair. They later moved to Porterville, California, Lake of the Ozarks, Missouri and finally to Glen Allen, Virginia where their son Bill Miller (William Glenn Miller) and his family lived at the time. Due to Gene’s failing health, they had been patients at Parham Healthcare and Rehabilitation Center since May 2019.

Gene was a member of Masonic Lodge #9 of Falls City for over 50 years. He served as Master in 1967. Barbara was active in the Eastern Star. While living in Porterville, they both were active members in the Manzanita Court.

The family would like to thank the staff at Parham Healthcare where they were loved and cared for as family. They would also like to thank Bon Secours Hospice for the care and support they gave to both of them. Per Barbara and Gene’s request, there were no services. Their ashes will be buried together at a later date in Falls City where their story began.