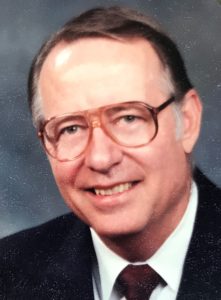 Jerry Blakely Waters, a native of Cheyenne County, Kansas, and most recently of Midlothian, Virginia, passed away June 12, 2019, after a long battle with Parkinson’s Disease. Jerry was a political scientist, farmlands advocate, policy strategist, photographer, chef, writer, naturalist, connoisseur of the best life offered. His was an accomplished life, defined by his inquiring, open mind and his eternal dedication to his family.

He is survived by his wife of 66 years, Janice Laverne Miller Waters, originally of St. Francis, Kansas; his daughter Ricki Carruth (and her husband Steve) of Mingo, West Virginia; son, Jeff Waters (and his partner Margaret Duncan) of Santa Barbara, California; and son Brent Waters (and his wife Mary) of Richmond, Virginia; grandchildren Miranda Carruth (and her husband Jered Clifton) of Baltimore, Logan Waters of Richmond, Freddy Carruth of Staunton, Virginia, and Sarah Waters of Richmond; sister Cathy Brunswig (Charles) of Ft. Collins, Colorado; brother and sister-in-law Marvin and Anita Miller of St. Francis; plus nieces, nephews, cousins, and many friends. Jerry is preceded in death by his parents, Roy and Bertha Waters of St. Francis; and sisters Dona Sherlock (Charles) of Castle Rock, Colorado, Dixie Keller (Robert) of St. Francis, and Beth Heitschmidt (Ernie) of Guyman, Oklahoma.

Born January 6, 1933, Jerry was raised on his beloved family wheat and cattle farm, Grandview, located outside St. Francis, Kansas, land he continued to own upon his passing. He received his B.S. degree in agricultural economics and journalism from Kansas State University. After graduation, with his new bride and baby daughter, he moved to Aldeburgh, England to serve as a commissioned officer in the U.S. Air Force. Upon return to the States, Jerry earned his Master’s degree in agricultural economics, then his Ph.D. in political science from Michigan State University. During this time, he and Janice completed their family with the birth of their two sons.

As Dr. Waters, Jerry became a political science professor at Kansas State University, where he taught for six years, before becoming chief of staff for U.S. Senator James Pearson (R-KS) in Washington, D.C., directing the Senator’s legislative efforts in farm policy, international trade and rural development. In 1979, he joined the consulting firm of E.A. Jaenke & Associates as a senior associate, serving clients in agribusiness, higher education, and the U.S. Agency for International Development. In 1985, Jerry directed the establishment and then oversaw the operation of Farmland Industries’ federal government relations program. He established his own Federal Consulting Services in 1997, focusing on the analysis of the changing economic and political structure of production agriculture. Upon “retirement,” he became a gifted photographer and developed a new family business venture, Grandview East, in Chincoteague, Virginia.

Jerry was a fierce warrior against his Parkinson’s Disease. He remained engaged in politics and enjoyed a good political discussion with family and friends until the end. His love of nature, literature, music, the arts – life, in all its wonders – was always shared with those lucky enough to be in his circle. His legacy is rich and will last through the generations.

He taught his children well.

Family and friends will celebrate Jerry’s life in a private ceremony this summer. In lieu of flowers, donations are welcomed to The Parkinson’s Foundation or The National Hospice Foundation.