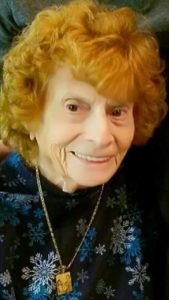 Joan Dygert, 85, of Henrico, peacefully passed away on Thursday, January 16, 2020, at her home, surrounded by her family.

She is preceded in death by her mother, Ruth Hitchcock, her sister Jean Orton, her first husband Norman Brush, and second husband John Dygert.

She was born in Elmira, New York on December 21, 1934. She graduated from Southside High School where she lettered in badminton. Her high school nickname was “Mouse.” She enjoyed sharing many stories of life growing up with her brother, sisters, cousins, and her loving Mom.

In 1971, she moved to Sarasota, Florida with her husband John, where she lived for 43 years, raising her children, spending time with her granddaughter, and enjoying life in the sunshine state. She was so proud of all of her children, especially of her oldest son and daughter, who both served in the Air Force. She had many occupations over the years however her favorite was her career as a health instructress, helping people better themselves. In 2014, she moved to Virginia, to be with her youngest son and his family. She cherished visits from her daughter and her oldest son and their families.

In her final days, she said, “The Lord has given me a wonderful life and family”. Spending time with her family filled her heart with joy. Her face would light up whenever she saw her children, grandchildren, and her precious great-grandchildren; getting and giving smiles, hugs, and kisses. She loved joking with her grandchildren, sharing her wit and making them laugh.  She always looked forward to attending their high school football games, marching band performances and their holiday concerts.  She loved talking to her children and grandchildren that lived out of town.  She enjoyed going for weekend car rides, watching TV, and seeing the birds and squirrels in her backyard. She could never resist eating her chocolate ice cream, tic tacs, potato chips, and chocolate candy kisses.

Hearing her soft voice saying “I love you” will be truly missed.

The family would like to acknowledge the kind and loving care she received from the Hospice group at Nayar Health Care. Along with the spiritual and emotional support they gave her loved ones.

Her grandchildren would like to express their sincerest gratitude for the unconditional love and care that her youngest son, Jeffrey, gave his mother throughout her final years, especially the continuous care he provided for her during the last three months.  He rarely left her side and we could all see how much it truly meant to her.

The family will honor Joan with a celebration of life gathering at a time still to be determined.