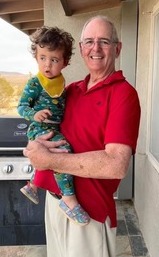 On Tuesday, April 12, 2022, John Charles Robichaux, 72, of Henrico, VA, passed away peacefully with his family by his side after a short, courageous battle with cancer.

John was born in Lafayette, LA on February 12, 1950 to Elwood “Tom” and Rose Robichaux (née Arnaud), and grew up in Lake Charles, LA.  In his early years, he excelled in school, and had a passion for the industrial arts.  He received many academic awards and graduated with honors as Valedictorian of his class from Grand Lake High School in Lake Charles, LA.

John always dreamed of becoming a pilot, so in 1970, he joined the United States Army as a helicopter pilot, primarily working with UH-1 “Huey” Helicopters.  He was stationed all over the world, and while serving in Seoul, South Korea, John met the love of his life, Sun (née Kim).  They were married on November 2, 1976 and share three loving children together.  John proudly served his country for 25 years in the Army and retired as a Chief Warrant Officer 4 in 1995. After his retirement from the military, his family moved to Henrico, Virginia in the summer of 1997.  He worked on the production floor of Qimonda (formerly Infineon) Semiconductor for over a decade.  John then went from computer chips to chocolate chips, working for Mondelez International Co. (formerly Nabisco) producing one of America’s favorite cookies, Oreos, for another 11 years.  In addition to being a provider, John enjoyed spending time with his family, reading science fiction, bowling, playing music, fixing electronics, and doing virtually anything on the computer.  Through his favorite computer game, America’s Army, John forged a community and many friendships from around the globe with both its players and developers. He was also a member of the organization for aviators, “QB” (Quiet Birdmen).

John is survived by his wife, Sun, of Henrico, VA; son John Jr. and wife, Heather, of Chandler, AZ; daughter Sarah and husband, Bryan Woodward, of Los Angeles, CA; son Matthew of Henrico, VA; grandson Asher; and his beloved dog, Jindorr. He is also survived by his brothers, David (Rebecca), Julian (Patricia), Francis (Lillian), Albert (Julie), and William “Bill” (Nancy); his sister, Suzanne (Randall) Hebert; and many nieces, nephews, great-nieces and great-nephews. He was preceded in death by his parents Elwood “Tom” and Rose Robichaux.

In lieu of flowers, the family please asks that donations be made in John’s memory to VCU Massey Cancer Center (www.masseycancercenter.org) or the Pancreatic Cancer Action Network (www.pancan.org).