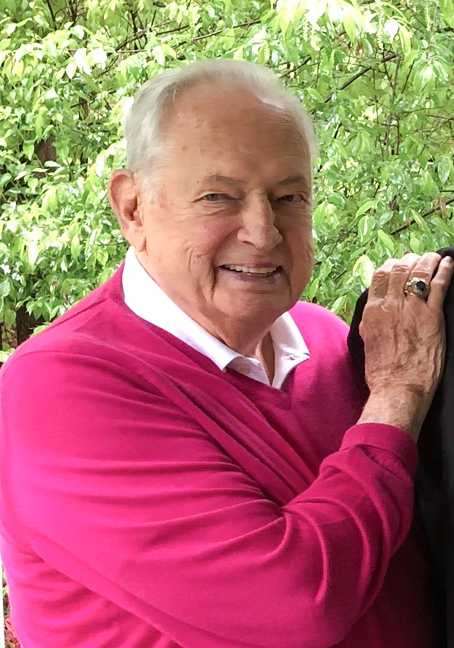 John was born in Utica, NY on July 8, 1931, to David and Adelaide (Sator) Dwyer.  John died peacefully surrounded by his loving family on December 9, 2021, at the age of 90, after a very brief illness.  Words cannot express how much we will miss our Poppy.

John earned his Bachelor of Science from Notre Dame in 1953.  He then joined the U.S. Navy where he served in Japan and earned the rank of Lieutenant.  After his service, John began working in pharmaceutical sales and eventually developed a full career in real estate. He opened his business, Appraisal Services Company in Newburgh, NY.  John was heavily involved in various realtor groups, serving as Regional Vice President of the National Association of Realtors and as President of the NY State Association of Realtors in 1988.  John married the love of his life, Marge, in 1998, and they become partners in life and business.  In 2001 John & Marge sold their business and moved to Hilton Head Island, where they both fell in love with the SC Lowcountry. Both John & Marge were well known in their industry and were active real estate teachers in both NY & SC.

John enjoyed boating in NY and again in SC during his retirement years.  John was an avid sports fan, reveling in watching the excitement of college athletes, especially Notre Dame football and basketball.  He would stay up late texting his grandson during the games.   He loved playing golf with friends and family.  He belonged to The Powelton Golf Club in Newburgh NY and then Oyster Reef in Hilton Head Plantation.  Even after retiring from the sport, listening to stories from his stepsons and grandkids continued to bring a smile to his face.  When our golf swing needed fixing, Poppy was always ready to help.

Family meant the world to John.  He had many fond memories of family reunions in the Adirondack Mountains, and always looked forward to visits from friends and family in Hilton Head.  He had many lifelong friends, and continued to make more as he recently moved to an assisted living community in Richmond, VA to be closer to family after the passing of his beloved wife Marge in October 2020.

In lieu of flowers the family asks that donations be made to St. Jude Children’s Hospital or the American Cancer Society.

A funeral mass will be held at St. Edward the Confessor Catholic Church in N. Chesterfield, VA on Saturday, January 29, 2022 at 10 a.m.  A private interment will be held at Beaufort National Cemetery in SC.