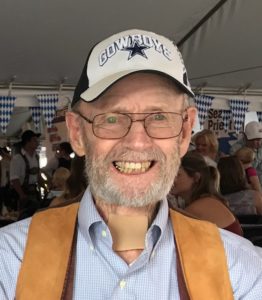 John Ralph McKelvey, 85, of Midlothian, Virginia, passed away on July 10th, 2019, surrounded by family. Born on December 27th, 1933, in Paragould, Arkansas, he was the son of Leonard and Belva Whelchel McKelvey.  He is preceded in death by his parents and his brothers Arthur, Dale, and James McKelvey.  John is survived by his wife of fifty-four years, Idalia Gonzalez McKelvey; his twin brother, Robert Ray McKelvey; his loving daughter, Laura McKelvey Toomey; his son-in-law, Patrick Michael Toomey; and his two grandchildren, Aileen Maria Toomey and John Kimball Toomey. John spent his childhood raising livestock and tending crops on the family farm with his parents and brothers; and he graduated from Arkansas State University. He served two years on active duty with the United States Army as a member of the peacekeeping mission in post-war Korea, and, true to his roots, pursued a career with the United States Department of Agriculture.  On the home front, he introduced his daughter to the joys of the outdoors – riding a bike, throwing softball, and growing a beautiful garden.

Following a distinguished career with the USDA, he joined his wife in Santa Fe, New Mexico.  While there, he assisted a colleague in starting a chapter of the American Volkssport Association, an international walking club, enabling himself and others to appreciate the stunning landscape of New Mexico. Upon his wife’s retirement, they moved to Maryland and then Virginia to keep up with their grandchildren, who were always welcomed with a warm mug of cocoa and a fun-filled tale about life growing up on the farm.

A celebration of life mass will be held on Friday, July 19th, at noon at the Church of the Epiphany, 11000 Smoketree Dr., Richmond, VA 23236.  Family will receive friends during visitation, beginning 11:30 am.  A reception will be held immediately following mass at the church.

In memory of John, donations may be made to the Church of the Epiphany, https://epiphanychurch.weshareonline.org  or Santa Maria de la Paz Catholic Community, 11 College Ave., Santa Fe, NM 87508, https://www.osvonlinegiving.com/1695