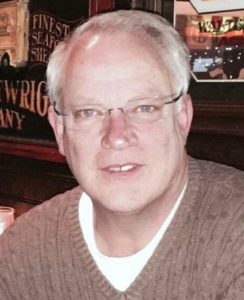 In Mt Carmel, Kyle grew up with a love for Baseball, a passion he shared with his children later in life. Kyle has also been an avid Football fan from a young age, from playing with the Mt Carmel Golden Aces in the 1974 Illinois State High School Football Championship Game to enjoying Virginia Tech Football with his wife and children. He was proud that Mt. Carmel recently honored numerous teams’ contribution to 100 years of Mt. Carmel Golden Aces Football.

Kyle is the youngest of four brothers and is survived by his brothers and their spouses Stephen H. Ernest (Shirley Ernest), Stanton D. Ernest (Peggy Ernest), and Kevin A. Ernest (Janice Ernest).

Kyle graduated Mt Carmel High School in 1975 and Wabash Valley Community College in 1977. While at Wabash Valley Community College, Kyle was the Chapter President of Phi Theta Kappa. As luck would have it, also while at WVC, Kyle met the love of his life, Shelly Ann Schofield, with whom he enjoyed over 42 years of marriage and together raised four wonderful children. He loved and cherished each of them.

Kyle also went on to graduate from Southern Illinois University with a B. A. Geology in 1980.

After graduation, Shelly and Kyle returned to Mt. Carmel to make their home. Kyle was a practicing geologist from 1980-1987 when he joined the United States Air Force. He was commissioned as a Second Lieutenant in the Summer of 1987 through Air Force Officer Training School (OTS) commissioning source.

Following the de-commissioning of the Strategic Air Command in 1994, Kyle was assigned to HQ Air Combat Command on Langley Air Force Base in Hampton, Virginia, where he concluded over a seven-year Active Duty service.

Kyle went on to serve his country as a contractor in various defense contracting roles, collectively serving his nation and supporting the military for 30 years.

In addition to his distinguished career in government service, Kyle was a visionary with an undying entrepreneurial spirit, from creating games for his children, only to find that a manufacturer would release a similar game a few years later, to his final business passion Rich City Roasters Coffee Company. Kyle tackled each idea with dedication, commitment, and bravery. This spirit of entrepreneurship and creating a better world is his legacy that he leaves to his children, his colleagues, and to his fellow man.

Kyle was preceded in death by his father Russell Dale Ernest and is survived by his wife Shelly Ernest, his dearest loving mother Virginia Lee (Armstrong) Ernest, his children and brothers.  Each of Shelly’s and Kyle’s children were with him the last several days of his life, a beautiful time for everyone.

One of Kyle’s final wishes was for everyone to be themselves and enjoy the life they chose to live, while letting others do the same. One of his favorite sayings was “fill your hearts with love and kindness” … that’s really not asking too much of anyone.

Kyle was a true family man and time spent with his wife and children is what he valued most of all. He enjoyed each community he lived within but found that New Kent County was especially dear to both he and his wife. The New Kent Community embraced Kyle and he genuinely appreciated that relationship.

Kyle was a loving son, brother, husband, father, and friend. May he rest in peace and watch over all that he loved.

A Memorial Service will be held November 5th at 2:00 pm at Fairfield Presbyterian Church 6930 Cold Harbor Rd, Mechanicsville, VA 23111. The service is open to the public.