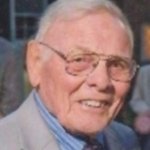 STILES, Joseph Clay Jr., born October 17, 1921, died September 22, 2017 at home. He is survived by his wife, Hilah Edney Stiles. He was preceded in death by his first wife, Elizabeth Luck Stiles. Joe is survived by his sons, Joseph Clay Stiles III, James Andrew Stiles and wife, Pam and Edward Gray Stiles and wife, Robbin; eight grandchildren and four great-grandchildren. Joe attended St. Christopher’s School and Randolph Macon College. He was a longtime member of the Ashland Kiwanis Club and served as a member of the Board of Trustees at Randolph Macon College. Joe was the owner of Luck Motor Company until his retirement in 2014. He served his country in WWII as an Army Air Corp P-47 Fighter Pilot, flying over 90 missions, including the invasion of Normandy. He earned the Distinguished Flying Cross Medal. A celebration of his life will be held at 2 p.m. on September 27, at the First Baptist Church in Ashland. A reception will follow the service. In lieu of flowers, donations can be made to ACES, P.O. Box 114, Ashland, Va. 23005.