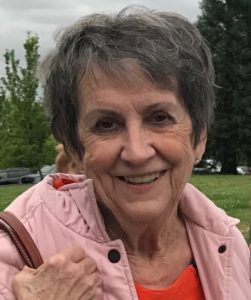 Kathy is survived by her husband, Richard DeIorio; her daughter and son-in-law, Nicole Deiorio and Thomas Yackel; her two grandchildren; her sister and brother-in-law, Donna and Michael Healy; her sister, Joan Doll, her brother and sister-in-law, Larry and Julie Doll; and many beloved nieces and nephews.

Kathy was born in Sandusky, OH and graduated from the St. Vincent’s School of Nursing in 1964. She worked as a pediatric nurse until she stepped away to raise her family. A devoted mother and grandmother, she spent the summers in Richmond, VA, to be closer to her grandchildren.

A funeral service is planned for Thursday, May 23rd, in Richmond VA. A celebration of life will be held at a later date in Florida. Memorial donations may be made to the Cape Coral Hospital Auxiliary Fund for scholarships: http://www.leehealth.org/volunteer/grants_scholarships.asp.

An online guest book is available at affinityfuneralservice.com