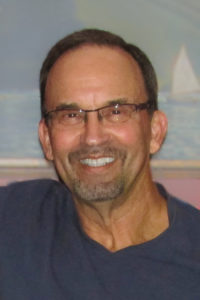 Kenneth Carl Virak, 71, of Chesterfield, Va. passed away Thursday, April 25, 2019 with his family by his side. His death followed a brief battle with Creutzfeldt-Jakob Disease (CJD) a rare neurological brain disorder.

Ken was born October 29, 1947 in Spokane, WA, grew up in Southern California, and served in the Air Force from 1967 to 1971. He lived in Europe in the early 70s and especially loved Germany. Upon his return to the US, he and his brother, David, cycled cross country from California to DC in 1976. He became a respiratory therapist in 1978 and cared for many patients over his 41-year career. He moved to Virginia with his wife Katherine in 1993, where they reared two wonderful children. Ken had a warm and contagious smile and a witty sense of humor. He loved gardening, fitness and exercise, the 49ers and the Dodgers. Most of all, he loved his family and children. Ken had hoped to enjoy all these activities and the people he loved for many more years to come, and was still working full time when diagnosed with CJD. The family would like to thank Ken’s co-workers at Chippenham Hospital for their support and extend a special thank you to Hospice of Virginia for their compassionate care.

The family requests in lieu of flowers, that donations be sent in his honor to the CJD Foundation, 3610 W. Market Street, Suite 110 Akron, OH 44333 or online at www.cjdfoundation.org to further support research and raise awareness.