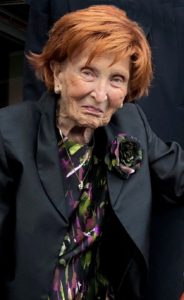 Louise Elizabeth Taylor of Ashland, KY died on Wednesday, July 10, 2019 at Community Hospice following a short illness. Ms. Taylor was born in Charleston, WV on October 15, 1927 the daughter of the late George Keith Taylor and Calista Hazel Tucker Taylor. She is survived by her cousin, Sally Smith of Richmond, Virginia; a god daughter, Meg Donnelly of Gill, Massachusetts, a god daughter, Naomi Floyd of Mobile, Alabama including special friends: Eula Oldham, Ruth Ann Johnson, Martha Lindsey Cooke, Betsey Del Santo, Beth Cooke, Ann Cossett, her many students and many, many other friends. Ms. Taylor attended public schools in Petersburg, VA. She moved to Ashland with her parents in 1942 when her father became employed at Ashland Oil. She attended Ashland Junior College and graduated from Marshall College. She was a life-long teacher. She first taught for two years in Richmond, Virginia, a year at Boyd County Schools and in 1948 began her tenure with the Ashland Independent School system where she taught thousands of students until she retired after forty-two years in 1990. She taught at Coles Junior High and moved to Paul G. Blazer High School where she completed her distinguished career. She recognized her former students throughout the years in the community and was always quick to acknowledge her recollection of them. She frequently entertained her friends, family and former students with stories of the joys she experienced in the classroom. She was an inspiration to all who were lucky enough to have gained the benefit of her knowledge of math, particularly Geometry. She was an exceptional teacher and mentor. Her smile and disposition lighted the path for many along the way. Her community activities were legion and diverse. She was a seventy-one year, loyal member of Calvary Episcopal Church serving in every imaginable capacity, including altar guilds, youth adviser, usher, treasurer, community kitchen server and vestry member. She served many years as a volunteer at Kings Daughters Medical Center and was made a life member in the KDMC auxiliary; a member of the Paramount Women’s Association since 1978 where she served as an usher and her support of the youth services has been vital to its survival. She was an avid attendee of Paramount events being a season ticket holder up to the time of her death. She was a member of the Colonel Thomas Ballard Chapter, National Society of Colonial Dames XVII Century; a dedicated member Poage Chapter, National Society Daughters of the American Revolution; member Colonial Dames of America; a member of the Daughters of the American Colonists; member Southern Dames of America; a member of the MacGregor Clan Society a member of the American Association of University Women; a member of the Ashland Civic League; a member of American Association of Retired Teachers and a member of Beta Sigma Phi Sorority. Her faithfulness to her church and to her many patriotic and civic organizations is unparalleled. She was recognized at the 2017 Ashland Community and Technical College graduation ceremony as a Distinguished Alumni of the Decade of 1940. A graveside service will be held at 10 a.m. Wednesday, July 17 at Forest Lawn Cemetery in Richmond. In lieu of flowers, friends are asked to make contributions to Calvary Episcopal Church of Ashland, 1337 Winchester Ave., Ashland, KY 41101; Paramount Arts Center, 1300 Winchester Avenue, Ashland, KY 41101; or Ashland Community and Technical College Foundation, 1400 College Drive, Ashland, KY 41101.