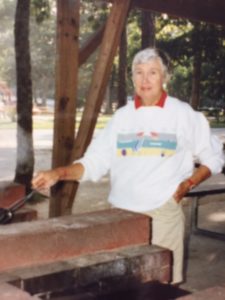 Goodwin, Margaret Wright Blair, of Avalon, NJ, passed away August 14, 2019 in Richmond, VA where she had lived for the past 7 years.  She was 96.  Margaret was born in Philadelphia, PA to Benjamin and Florence Blair.  She graduated from the University of Pennsylvania in 1945 with a BS in Bacteriology and Zoology and worked in the field of cancer research until her first child was born.  She married Dick Goodwin in 1947.  She is survived by her four children Susan Wagenhofer (Paul), Michael Goodwin (Karen), Amy Goodwin, and Jeffrey  Goodwin (Julie), by her eight grandchildren, Andrew (Lindsay) and Sarah Wagenhofer; Kirstin Connell (Dave), Michael Goodwin Jr, Jacob Goodwin, and Hannah Baldassano (Jeff); and Chloe Barry (Jason) and Ben Goodwin; and by her five great grandchildren, Jack and Max Wagenhofer and Caleb, Clara Margaret, and Thomas Connell.

Margaret was a beloved homemaker and active volunteer in all of the communities where she and her husband lived during their 64 years of marriage.  In Rockville, MD she started the organization French Language in Elementary Schools.  In Upper St. Clair, PA Margaret was the Girl Scout leader of troop 1619, taking the troop to Mystic, CT three times for sailing and down many rivers on canoe trips.   She taught Sunday School for decades in Pittsburgh and in Stone Harbor, NJ. She volunteered for the cancer drive, the heart drive, the Red Cross, and Meals on Wheels. One of her great pleasures was the Women’s Club of Upper St. Clair, where she formed deep friendships and served as the Ways and Means chair and treasurer.  Margaret was also pioneer in recycling, organizing a newspaper drive with her Girl Scouts and then helping to establish a recycling center.

In 1982 Margaret and Dick moved to their summer home in Avalon, NJ, the home she loved best, built by her father in 1926.  She and her husband were volunteers for the Wetlands Institute.  Margaret served as a docent for marsh tours. The Wings and Water Festival was a yearly event she looked forward to, for which she calligraphied  many signs and chaired the Welcome Tent.   She was active in the Avalon Garden Club and led the project to have the sculpture of the Girl with the Kite installed at the 30th street entrance to Avalon.

Margaret was a wonderful cook, each year making many varieties of cookies at Christmas, naming new kinds after the friends who had given her the recipe.  She was an artist who loved to make things and to take painting classes to learn new techniques.    Her husband once joked that if he sat too long he might find that she had done some tole painting on him. She loved classical music, and her children remember her sitting down to play the piano as she waited for the washing machine to fill or finish.  She loved to entertain, and enjoyed participating in the international dinners for the Retired Officers’ Spouses Club of Cape May, NJ.  With friends she formed GLUG, the gourmet luncheon group.  These ladies would pick a theme, like a day at the races or hospital food, and dress up in costumes.  They would drive to the house of the member hosting the lunch, hoping not to get stopped by the police, and laugh a lot as they ate their lunch.

Margaret enjoyed traveling with her husband, visiting her daughter Susan’s family when they lived in Egypt, Norway, Indonesia, England, and Bangkok, and when Amy lived in Paris, Margaret and Dick spent the summer there.  They both loved Cancun and spent the cold months of winter enjoying their community of friends, the beaches, and the shops.  In lieu of flowers, contributions may be made to The Wetlands Institute, Stone Harbor, NJ.