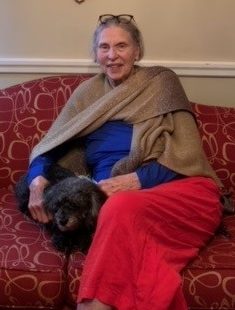 Marian was born in Louisville Kentucky, and, after graduating from Smith College in 1950, married Malcolm J. Agnew, a 1949 graduate of West Point. After tours in the United States, Spain, and Germany with the United States Air Force, Colonel Agnew’s family settled in McLean Virginia with their three children Leslie, George, and Zander. The family then expanded with the addition of Malcolm’s nephews, Charles and Jamie.

During their time in McLean, Marian earned her Law degree from Catholic University to facilitate her passion for creating parks and protecting the environment. Additionally, fighting injustice was a major focus for Marian.

In the 1980’s, Marian was drawn to become a member of the Baha’i Faith by its principles. Of primary importance to her were the oneness of mankind, the oneness of religion, the equality of men and women, and the emphasis on justice.  “The best beloved of all things in My sight is justice.”

Marian was a vibrant, gutsy, and talented lady. She loved painting, gardening, and interior design. She will be deeply missed by her family and friends – especially her constant companion, her beloved poodle, Oliver.