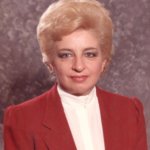 MARILYN DORTCH LAZAR was born Marilyn Ann Squiccimarra to George Squiccimarra and Jeannette Tavaglione Squiccimarra on September 2, 1933 in Pittston, Pennsylvania. Her Grandfather Nicola Squiccimarra came to the United States, legally, through Ellis Island and found work in the coal mines.

Nicola gave his life in the Industrial Revolution when he contracted lung disease and passed at age 33. George was sent to coal mines at age 14 along with false working papers that made him older. This was required so that his Mother and younger siblings could eat. Jeannette worked in a sweat shop flag factory at piece rate compensation under a straw boss.

Marilyn was born in the midst of the depression. By that time the family had moved to Philadelphia because of layoffs in the mines. George was working in a factory that refurbished carburetors and Jeannette was working in another sweat shop making flags.

Marilyn was instilled with an amazing work ethic because of the necessity of the times and the influence of her family. She was keeping up the household chores at 12. She attended Murrell Dobbins High School in Philadelphia. She graduated in four years with two diplomas: Business Technology and the College Preparation curriculum. She also played piano with the band and for her church. At the end of her graduation ceremony, the band director asked her who had taught her piano and who she had studied under. When he learned that she was self-taught and never had lessons he exclaimed, “If I had known that I would have given you the music award!” Marilyn typed 120 words a minute on a manual typewriter (no errors) and took short hand at 160 words per minute.

Marilyn worked in the defense industry typing orders on the floor of a plant where jet aircraft were being assembled. OSHA who? In those days, it was not common for women to work.

She co-founded a shopping service business in 1954. The business lived month to month most of the time. It was fueled by her work ethic and an unshakeable belief that she would be successful. She often said, “I never play to lose.” She was very proud to take that company public as CEO in 1984. It took 30 years to be an overnight success. At that time it was unusual to have a woman CEO take a firm public.
Over the years that business provided hundreds of jobs for its employees and vendors.

Marilyn was married 3 times and spent 11 years with her final companion. I joked with her that she had outlived 4 husbands. (The last two never thought that possible.) She always said, “I’m too ornery to die.”

Marilyn raised two children, on her own during some periods. During one six year period she had to work in New York, driving 150 miles home to her children on Friday night and back to work on Sunday night. She expressed her great love by working hard to provide for them and by passing on her work ethic and moral foundation.

Marilyn loved to play cards. She was an accomplished bowler. She was virtually unbeatable at Scrabble. She enjoyed being at a casino.

The family will receive friends from 10 am to Noon Friday, February 26 at Affinity Funeral Service, 2720 Enterprise Pkwy, Richmond, VA. A graveside service will be held at 11:30am Monday, February 29 at Brainerd Cemetery in Cranbury, New Jersey.

In lieu of flowers memorial donations may be made to the Western Henrico Rotary, c/o Scott Strickler, 2800 N. Parham Rd., Richmond, VA 23294