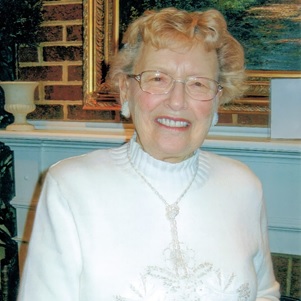 On October 19, 2020, in the quiet moments of morning, Marilyn sailed from our sight on her final journey.   Marilyn’s adventure began on July 24, 1927 in Port Washington, NY where she was born at home to parents Muriel Porter Sherman and Frank Edward Sherman, Sr.  She joined brother Frank (Ted) Edward Sherman, Jr., who would become the first love of her life. Growing up in that place at that time was iconic; extended family living nearby, children in the neighborhood with whom to walk to school and play after school.  Marilyn’s grandfather was Melvin M. Porter, a builder of fine homes in Port and Sands Point.

A Girl Scout, Marilyn was the first in her Council to achieve the newly established rank of Senior Service Scout at 15.  Marilyn knit socks for UK servicemen, earning a “Knitting for Britain” pin.  While father and brother enlisted in the US Navy and were serving in the Pacific, she, too, found ways to serve.  She participated in Civilian Defense training and earned awards for serving as Hospital Aide and helping transform an old home into a youth center.  She also earned awards for academic achievement in her business classes, graduating from Port Washington Senior High School.  Her yearbook, which described her as “sweet with a likable disposition”, is signed by Country Music Artist Hank Thompson, with whom she shared a war-time romance.

Marilyn attended Becker Junior College in Worcester, MA, and joined Delta Chi Lambda.  She graduated in 1946 with a degree in Business and Banking.  After commuting to Fifth Avenue for a few years, she landed at the Port Washington Lumber Company, where she worked as bookkeeper and office manager for sixteen years.

In 1950, Marilyn married Coy McDaniel of Concord, NC whom she met on a blind date.  Following their marriage, they moved to Norfolk, VA and had an only child, Genne.  A divorce followed soon after, and Marilyn and Genne returned to her parents’ home in NY.

Friends convinced Marilyn to join them at a new, year-round resort in the Berkshires.  Eastover Resort was indeed a special place and it was here she met John Valeri.  Marilyn and John were married in 1965 and settled in Lenox, MA.  John was employed at Eastover and here, Marilyn and John owned their first and only home for nearly fifty years.

Marilyn continued working, first at Rockwood Academy, then Small World Travel.  She became a travel agent specializing in cruises at the Travel Store.  Her passion was travel.  Marilyn and John traveled often, visiting the U.S., Caribbean, Mexico, Europe, the Mediterranean and the Baltic.  She loved Europe, especially Italy.  Marilyn has been to the Arctic Circle and cruised the Nile River and had meaningful souvenirs from her many trips.

Marilyn was an accomplished gardener and seamstress.  She loved dressing in costumes for Eastover-sponsored parades, North-South Skirmish Assn. events and holidays.  A member of the Church on the Hill for 48 years, she was proud of the floral arrangements she created for services and serving as deacon.  She enjoyed presenting programs on her many collections and travels for the Women’s Fellowship Luncheons.  Marilyn served as Treasurer for the Lenox Historical Society for 28 years, volunteered at Chesterwood, the home and studio of Daniel Chester French, sculptor most known for the Lincoln Memorial in Washington, D.C. , joined the Garden Club and created a life full of friends and enrichment.  Marilyn and her mother worked on the Porter family genealogy for ten years.  The results gained them access to the Daughters of the American Revolution, where she was a member for 45 years.  A true life-long learner, Marilyn loved going, seeing and doing.

In 2015, Marilyn moved to Brandermill Woods Retirement Community in Midlothian, VA.  She loved the exercise classes, walking group, craft classes and Women’s Group.  Marilyn enjoyed day trips and made many new friends.  She joined the Brandermill Church where she attended regularly.

Marilyn was preceded in death by husband, John P. Valeri of Lenox, MA and brother, Ted Sherman of Lake Worth, FL.  She is survived by daughter, Genne McDaniel Johnston and husband, Rick Johnston of Glen Allen, VA, grandson Sean T. Johnston and wife Melanie Kaufman Johnston of Burke, VA and granddaughter Katie Elizabeth Johnston of Newport News, VA.  In addition, Marilyn is survived by nieces Margaret Sherman of Port St. Lucie, FL, Kathi Ballard of Tequesta, FL and nephews William (Bill) E. Sherman and wife, Jane Ellen Sherman of Lake Worth, FL and Robert E. Sherman of Big Pine Key, FL and four great nieces, a great nephew and  five great-great nieces and nephew.   Her family are grateful for the outstanding care she received from James River Hospice and Seniors Helping Seniors.  A celebration of life is being planned for Brandermill Community Church with interment to follow in Port Washington, NY.

In lieu of flowers, donations may be made to Feed More.  Loved by many, Marilyn’s joyfulness, zest for adventure and sense of fun will be greatly missed.