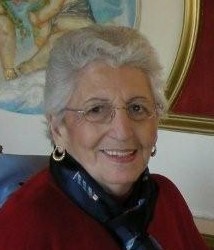 “Marti” Bastedo, 89, died peacefully on December 14, 2021 in Midlothian, Virginia. She was born May 8, 1932 in Santa Fe, New Mexico and was christened Maria Lucianita Martinez. Growing up, “Mary Lou” always wanted to be nurse. At 18 she left Santa Fe to attend nursing school in Kansas City, Kansas. There were multiple Mary Lous in her class, so from then on, her nickname became “Marti”.  After graduation in 1953, she returned home to work at St. Vincent’s Hospital, but she longed to see the world. She was commissioned a 2nd Lieutenant in the Air Force in 1955 and graduated from the School of Aviation Medicine to become a flight nurse. Marti did see the world with assignments as far away as Casablanca, Morocco, before landing at Westover Air Force Base, Massachusetts where she worked as a surgical nurse. It was there she met the love of her life, William (Bill) Bastedo, another Air Force officer. They married four months after meeting in 1958, and had their first child on their first wedding anniversary. Marti received an honorable discharge from the Air Force to raise their four children and shepherd them across the country as Bill’s career assignments took them from Massachusetts to Texas to Alabama to California, back to Texas, and then back to California before settling in Alexandria, Virginia in 1971. When the children were older, Marti became recertified to practice nursing. She worked in a nursing home and finally as an office nurse for a general surgeon. Upon retirement, Marti and Bill moved to University Village in Charlottesville where they enjoyed an active social life. Much of their time was spent traveling the world on cruise ships. They toured all seven continents and countless countries. Marti was an active volunteer and she especially enjoyed working with Hospice and Recording for the Blind & Dyslexic. Her proudest volunteer time was spent serving as an Arlington Lady at Arlington National Cemetery from 1990-1995.  Throughout her life she was an avid reader and lover of the arts, especially the Charlottesville Symphony at the University of Virginia. She was in multiple bridge groups and completed as many as five crossword puzzles a day, sometimes more!

A funeral mass and burial will take place at a later date at Arlington National Cemetery.