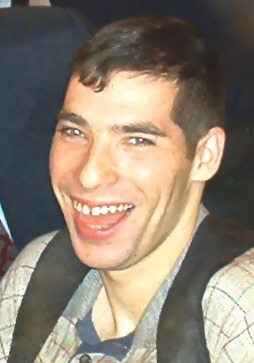 Nathan Rossbacher, 40, of Richmond passed into the arms of our Lord on Sunday, January 13, 2019. He passed peacefully with his father by his side.

Nathan was born January 6, 1979 in Roanoke to Robert and Judith Tate Rossbacher.  He graduated in 2000 from Cave Spring High School in Roanoke.  Nathan attended First Baptist church in Roanoke for many years.  In 2004 he moved to the The Virginia Home in Richmond. Nathan was very involved in all of the social activities and faithfully attended the chapel services there.

Nathan loved everyone he met and they loved him.  He had an infectious smile and a life-giving spirit that touched so many. Nathan was an avid Redskins fan and loved keeping up with schedules, the calendar and special events.

Survivors include his parents, Bob and Judy Rossbacher of Richmond; sister Kristen Cox (Jason) of Louisville, KY; and brother Justin Rossbacher of Lynchburg.  He was preceded in death by his twin brother, Seth; his grandparents, uncle Daniel Nester, nephew Peter Cox and niece Sarah Cox.

In memory of Nathan, memorials may be made to The Virginia Home, 1101 Hampton St., Richmond, Va. 23220 or www.thevirginiahome.org/get-involved /donate.