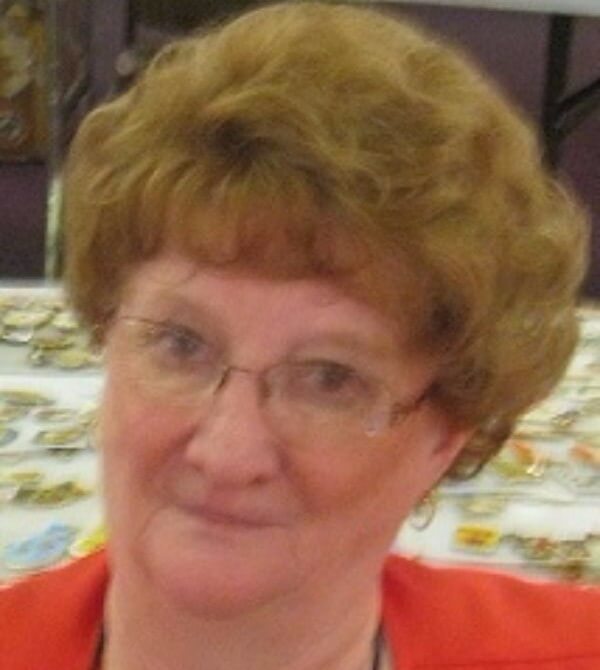 Susan began her life in Portsmouth, Virginia on VJ Day, August 17, 1945. Her father decided after being in Virginia that it was time to head back to the Mid-West, so they move to Cedar Falls, Iowa. She graduated with a bachelor’s degree for Medical Transcription. She worked as a Mental Health Insurance Specialist, also. She moved to Virginia in 2002 and married Richard in 2004. During that time, she did design work for her Lapel Pin Business.

She was active in a Bell Choir at her church in Waterloo for 20 odd years.
Lion Susan became a Lion during the International World-Wide Induction day in 1998. She was a member of the CedarLoo Breakfast Lions Club in Waterloo, Iowa. She moved to Virginia in 2002 and transferred to the Highland Springs-Sandston Lions Club and then the Ashland Lions Club in 2004. She has had perfect attendance since she became a Lion.

Lion Susan being an avid pin trader, if you ask, she will say, “Yes, we need more pins because 10,000 of them are not enough!”

Susan claims she will help on all projects in her club, but one, and will help any club or person in any way she can. However, the yearly project for Remote Area Medical is a way to bring her back to being humble and is the true meaning of helping each other. “We Serve”

She has been married to PDG Rich for the past 12 years and they have been together a total of 16 years. Between them they have eight grandchildren, Kirstin, DJ, Brian, Mary, Ben, Muranda, Olya, Kalin; and three daughters, Carrie, Lori, and Jennifer.

In lieu of flowers, memorials may be made to the Virginia Lions Hearing Foundation (VLFH) in memory of PDG Lion Susan, UVA Health Systems, c/o VLFH, P.O. Box 800477, Charlottesville, Virginia 22908.

Below is a list of Susan’s accomplishments and the office’s she held during her time as a Lion: