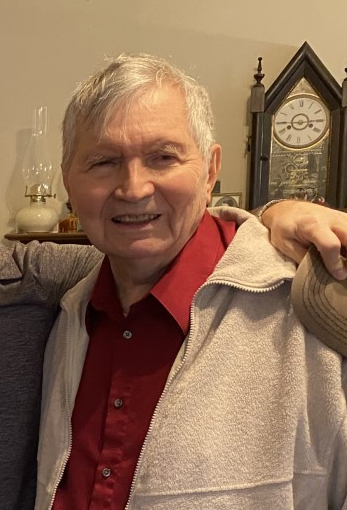 A CREATIVE THINKER OF THE HIGHEST ORDER

Perry Jeraud Thompson, 94, fell on sleep on Thursday, August 11, 2022 in Richmond, Virginia, and awaits the return of the Lord Jesus Christ.  His last day was warmed by the company of the love of his life–Irma Jewell Thompson (Hensley); and sons, David and Marc Thompson.

If you were to sit and visit with Perry, he would share his excitement and love of airplanes, engineering, and his notable story of how he assisted in ending WW2 when he was 16 by delivering the barometric trigger for the atomic bomb to the Secret Service.  He also loved BMW motorcycles, and engineering and proofing designs for multi-million dollar platforms at the kitchen table using popsicle sticks and thumb tacks.  He was a helicopter crew chief during the reconstruction of Europe in the 1950s, and later developed designs for the C-5A, the C-130, the F-15 Eagle, the F/A-18 Hornet, the Harrier A/V-8B, at Lockheed and McDonnell Douglas.  He held patents for his designs.  He would regale you of some (yet to be heard) adventure in Europe or Africa or the swamps of Florida as a younger man, or how he built a daycare for the children of migrant workers when he was still a teen in Michigan, or how he built his first house and moved out when he was 16. Even in his 94th year, we were still hearing new stories.  His grandchildren called him “the greatest bedtime story-teller ever.”

Perry had an extremely inquisitive mind, deeply believed no honest question was ever bad, and firmly held that considering all possibilities–no matter how unconventional–was the best way to improve life and solve problems for all humankind.

He always greeted his boys with a warm grasp on the neck and an “I’m proud of you!”  A notable quote is from Mary Sevier shortly after he married Irma Jewell in May of 1965:  “Can I call you Daddy?” was her first question.  Shortly thereafter…in her first time in a grocery store (she was 11)… she said “I now know I’ll never go to bed hungry again.” because of the brighter future he brought her and the family.

When we remember the best moments of Perry Thompson, those bright moments remind us of Romans 12:15:  Rejoice with those who rejoice.  He loved to help others more than himself, and he would exhaust his resources to help you.  He rejoiced in those who weren’t constrained by common opinion or imposed rules alike–and who did what they said and lived rightly, and who were creative in finding solutions.  He viewed all of life as an adventure to be explored and to learn from.  To Perry–until we meet again, we will carry on your tradition of selflessness, of creativity, and of being 100% present in all we do. Thank you for the excellent example–see you in Act 2!

The Memorial Gathering and Interment at Quantico National Cemetery are private.