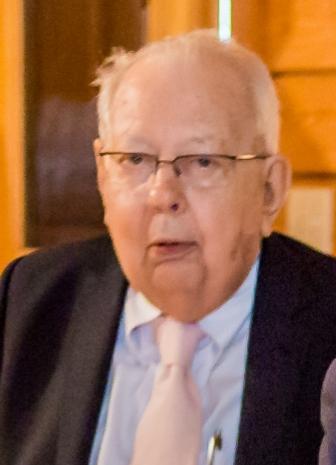 Ford was born in Lincoln, Illinois to R.B. and Mabel Ford Lanterman on July 24, 1931. He grew up in the small farming community of Elkhart, Illinois. After graduating Elkhart Community High School in 1950, he attended the University of Illinois Champaign-Urbana and graduated from there in 1954 with a degree in Agriculture. It was soon after graduation that Ford received an offer from the U.S. Department of Agriculture where he spent the next 39 years. His career with U.S.D.A. started in Chicago (1955) and finished in Washington, DC (1994), his one and only career. Ford still celebrated his first day of work with U.S.D.A. every year. During his time at U of I, mutual friends introduced him to his wife and best friend Connie whom he married on July 13, 1956.

Ford’s favorite pastime was staying abreast of political, financial, and agriculture news by reading multiple daily newspapers. During his lifetime, he was a lifelong fan of the various University of Illinois Sports Teams and the New York Yankees and enjoyed an annual houseboat fishing trip with former co-workers. Ford dabbled in Illinois oil production, as his father had done, and was a member of Tri-Oil, LLC. He was a member of Seventh Street Christian Church of Richmond, Virginia where he had served as a board member and trustee.

Ford was preceded in death by his parents R.B. and Mabel, an infant sister, his brother Henry and an infant son. He was a wonderful and devoted loving husband, father and grandfather and

is survived by his wife, Connie; his sons Daniel and Bradley and his partner David Fleetwood; and grandchildren Tyler and his wife Whitney, Kelsey, and Elyse as well as multiple nieces and nephews.

A private interment will occur later at the family plot in Elkhart, Illinois. In lieu of flowers, the family requests donations to your favorite charity in his honor.