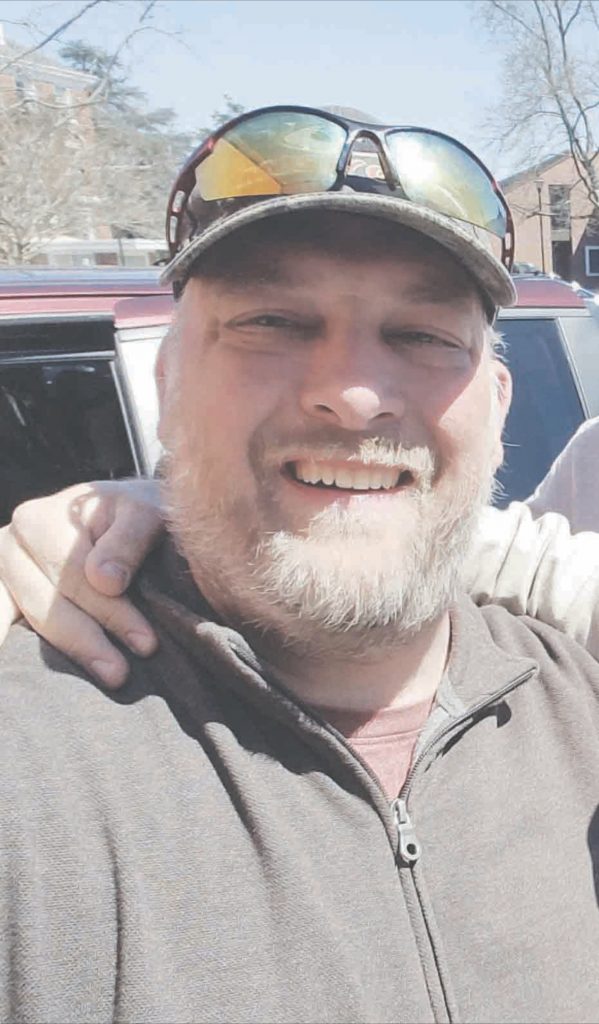 Rex Robert Kahler, 43, of Glen Allen VA, went to be with the Lord on August 29, 2021. Rex was preceded in death by his brother Casey Ross Kahler. He is survived and will be dearly missed by his beloved wife Shawna, two sons Gavin and Rafe Kahler, mother Lizabeth Anne Kahler, father Craig Robert Kahler, brother Aaron Kahler, sister Lisa Green, many nieces, nephews, friends and his loyal canine companion, Lester.

A memorial service will be held at 11:00 AM on September 9th, 2021 at Affinity Funeral Service, 2720 Enterprise Parkway, Richmond, Virginia 23294. Click here to view the live-streamed memorial service.  All are welcome. The family will receive friends at a gathering in Rex’s honor, with food provided, following the service at Bryan Park, 4308 Hermitage Road, Richmond, Virginia 23227, Pavilion #3. It will begin immediately following the service.

Rex was born on November 11, 1977 in State College, PA the son of Craig Robert Kahler and Lizabeth Anne Kahler, who moved into Virginia in 1980 where Rex would reside for his entire life. He grew up in the central Virginia area, where he discovered his lifelong passions for the outdoors and sports, and established his renowned competitive spirit. He engaged in sports at every chance he had so he could hone his keen aptitude for athletics, especially football. He played for various recreational teams, and after graduation from homeschool, played semiprofessionally for the Kodiacs in King George. Following in the footsteps of his father, he was a lifelong Pittsburgh Steelers fan.

Rex met the love of his life, Shawna on a blind date, and later on January 21, 1999, the two wed. That same year they welcomed their first son Gavin. In 2002 his second son Rafe was born. Rex frequently expressed how he always wanted two boys of his own to raise, and worked tirelessly to support his cherished family.

Rex was deeply devoted to family, and there were many friends whom Rex would have considered family. He enjoyed, in fact insisted upon, holding large gatherings where he was most often the coordinator, host, and even cook. There could never be enough people in attendance for him, at times to the chagrin of his parents, when as a child he would insist upon inviting everyone he knew to his birthday celebrations. He always took time to remind Shawna, Gavin, and Rafe of the special preeminent place that they held in his heart. He enjoyed taking them on walks throughout the various parks in Virginia, sharing his favorite movies and shows, and playing Mario Kart and Super Smash Bros. after work was a regular family event. He appreciated all the interesting local restaurants and enjoyed sharing those experiences with his family. As a loving father he always ensured that his sons had the opportunity to approach him for advice on any and every matter.

Rex was a man of strong convictions. He always stood up for what he believed in and spoke up for those who could not. He spent over a decade devoting much of his time to the work of evangelism and other church ministries as he was called upon at Victory Baptist Church. He was a skilled, gentle teacher of youth ministries and was unafraid to hold fast to the truth of scripture as he taught hundreds of children each week. Rex was faithful in serving his church as well as the community at large. He created and ran his own graphic design business, supporting and networking to support other businesses in the Richmond area and beyond.  He most recently obtained a commercial drivers license (CDL) and was employed with a company which had allowed him to drive a semi-trailer truck to most states on the eastern seaboard and the majority of gulf states, a thing of which Rex was most proud to have accomplished.

Throughout his life Rex always had a steadfast character on which others could depend. Anyone who knew him at any stage understood that they could count on his consistency of character and knew where they stood with him. He was well known for his generosity, reliability, outgoing personality, and he was loved by everyone who knew him.

Donations for Rex and his family can be made following this link: https://gofund.me/763f9c77

2 Timothy 4:7 “I have fought a good fight, I have finished my course, I have kept the faith.”