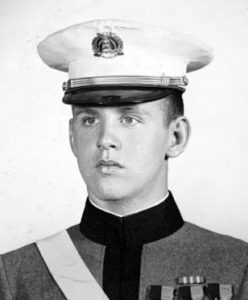 Richard “Dick” Mills Barrett, Sr., 83, passed peacefully at his Henrico, VA. home on Tuesday, May 28, 2019.  Dick was born in Richmond, VA. to Wilber Burl Barrett and Lucy Inez (Hicks) Barrett.  He and his sister, Catherine, grew up in the communities of Church Hill and Highland Park. He also lived in Cincinnati, OH., Highland Springs, VA. and the West End of Henrico County.

Dick attended John Marshall High School and served in the Company ‘D’ Corp of Cadets.  In his later life, he served for ten years as president of the board of the John Marshall Cadet Alumni Association where he led numerous Memorial and Labor Day observances at Hollywood Cemetery; facilitated their Virginia Military Institute scholarship program and supported the Cadet program and exhibit at the Virginia Historical Society.  Dick was instrumental in the design and placement of the bronze Cadet Statue on the lawn of the John Marshall House in Richmond, VA. commemorating the young men who wore the uniform from 1915 to 1971.

Dick attended Ferrum College in Ferrum, VA. serving as Captain of the Baseball and Football teams where he scored the school’s first touchdown; and in 1997 was inducted into the school’s Alumni Sports Hall of Fame. Awarded a four-year football scholarship at Xavier University in Cincinnati, he earned his Bachelors and a Master of Education. Dick then served as a teacher, coach and administrator in the Cincinnati public school system while putting himself through the Cincinnati College of Law where he earned his Juris Doctor.

Returning to Richmond, Dick joined Henrico County Public Schools coordinating the county’s health, physical education and drug education programs and remained with the school system until retirement.  He also attended Virginia Commonwealth Universities Business School Management Development Program and was adjunct faculty at VCU, The University of Virginia as well as consulted with the College of William and Mary. He also provided pro-bono legal services to the community.  Dick served six years in the National Guard and three years in the Army Reserves.

Civic minded, patriotic and gifted as an educator and leader, he served on the boards of many alumni and service organizations.  Along with his support to the John Marshall Cadet Alumni, he served twice as chairman of the Henrico Chapter of the American Red Cross and the Virginia Capital Area Chapter of the March of Dimes.

Dick had a strong faith in God and was a long time and giving member of the West End Assembly of God Church. In his later years he was an avid golfer and tennis player.  In golf he was able to shoot his age on multiple occasions.  Dick had many circles of friends that he supported and who supported him as well.

Dick is survived by his son, Richard M. Barrett, Jr., his wife, Kelly and their children, Liam and Megan of Temecula, CA. and Shannon of Buffalo, NY.; son Robert S. Barrett and his daughter, Xenobia of Santa Cruz, CA.; daughter Elizabeth Barrett Allen and her sons, Brandon and Parker of Boston, MA.; and son Ryan V. Barrett, his wife, Kelly and their daughters, Haley, Morgan, Piper and Rory of Provo, Utah; the mothers of his children, Sandra Cheatham Nelson (Richard, Jr.) and Sandra Sanders Barrett (Rob, Beth and Ryan); along with his niece, Sheron Stanley Nunez, her husband, Raymond, and their children; and grandchildren of Chesterfield, VA.

A memorial service will be held at 11 a.m. on Saturday, June 15 at the West End Assembly of God, 401 N Parham Rd, Richmond, VA. with a reception at the Church to follow.

A commitment of ashes will be private.

Dick expressed his deepest gratitude for the kindness shown by many people during his illness including Beverley and Forrest Matthews, Nancy and Bob Bullock, Sheron and Ray Nunez, Norman and staff at Westbury Deli, and Steve at Steve’s Auto Service.

In lieu of flowers, Dick requested that donations be made in his name to West End Assembly of God or to John Marshall Cadet Memorial Scholarship Fund at VMI Foundation Scholarships, Neikirk Hall, 304 Letcher Avenue, P.O. Box 932, Lexington, Va. 24450.