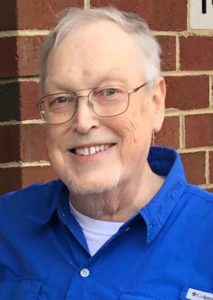 He was a 1967 graduate of Charles D. Owen High School and continued his schooling with a BS at East Tennessee State University, then finishing up at the University of North Carolina Chapel Hill Dental School class of 1977. Bob was a dentist in private practice. Most of his 30+years as a dentist were spent serving the veterans at various VAMC. He retired as Chief of Dental Services at the Mountain Home VA Medical Center, Johnson City, TN.

He was known for his quick wit, infectious smile and his kind and caring spirit. His family was the most important aspect of his life. Living in Johnson City, TN most of his life but decided to move to Midlothian to be closer to his daughter and grandkids. They were the highlight of his life along with his Loving wife of almost 48 years, Rita. Bob loved spending time with his family and he loved to fish. He often made his own flies for fly-fishing, which he enjoyed with his son, Travis, who unexpectedly passed away 8 years ago in a mountain bike accident in Colorado.

Those left to cherish his memory are his wife Rita Bowlin Hunter; a daughter Shannon Hunter McConville and husband Chad; 2 grandchildren, Lilah, and Paxton McConville; a sister Cora Lee Hunter Brackett and husband Teddy; a niece Faith Gardin and husband Josh; great-nephew Maverick Gardin (and his twin, Declan is with Bob in heaven) of Swannanoa, NC; and a nephew Cliff Bowlin of Morristown, TN.

It was Bob’s wishes to be cremated, a Memorial service will be at 11:00 am Saturday, July 13th at St. Marks Methodist Church with Pastor Fran Cooper officiating. Reception afterward at church. There will be a celebration of life ceremony in Johnson City, TN at a later date.

The family wants to express gratitude to an amazing and compassionate medical team that were involved and supportive of every aspect of his cancerous journey: Oncologist, Dr. Y. Choudhary and Radiation Oncologist, Dr. D. Randolph, Sr. and their staffs. We would also like to thank James River Hospice for their compassionate care of Bob. In Lieu of flowers, you can make a donation to Sarah Cannon Cancer Institute at Johnson Willis Hospital, Richmond, VA or the Hawthorne Cancer Resource Center at Johnston Willis Hospital