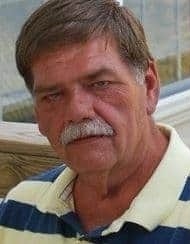 Ronald Lee “Ron” Sampson, 72, of North Dinwiddie, formerly of Harrisonburg, passed away at his residence July 18, 2020.

He was a U.S. Air Force Veteran. Ron worked as a police officer in Bridgewater and Harrisonburg and later worked in retail management for the Virginia ABC. He was preceded in death by his wife, Anna N. Sampson.

Services will be held at a later date. In lieu of flowers donations may be made to the Wounded Warriors Project.

‘I JUST CAME BY TO TELL YOU, LORD,
HOW HAPPY I HAVE BEEN,
SINCE WE FOUND EACH OTHERS FRIENDSHIP
AND YOU TOOK AWAY MY SIN.
DON’T KNOW MUCH OF HOW TO PRAY,
BUT I THINK ABOUT YOU EVERYDAY.
SO, JESUS, THIS IS Ron,
JUST CHECKING IN TODAY.’