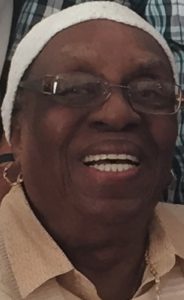 Our dearest loved and cherished mother, grandmother, great-grandmother, and friend, Ms. Rosalie Marie Jeffries, was born to the late Lena Jeffries Brown in Philadelphia, Pennsylvania, on September 16, 1923.  There comes a time in everyone’s life when they must depart from their loved ones.  On November 6, 2019, this time came for Rosalie Marie Jeffries at Henrico Doctor’s Hospital, as she left her earthly burdens to assume her position amongst the angels.

Rosalie was educated in New Jersey Public Schools.  She later went on to work as a professional hand presser at various cleaners in New Jersey until her retirement.  Cooking, dancing, and shopping were her favorite pastimes.  Her specialties included macaroni and cheese, homemade soups, and chicken and dumplings.  She also loved “getting jazzed up” as she would say; especially, when she would go shopping at Macy’s and Kohl’s and dressed like “New York’s finest!”  In her leisure, she also enjoyed watching cooking shows and “Law & Order” on television.

Known to many as “Nana,” Rosalie lived a full and productive life.  She made lasting impressions on everyone she came in contact with and she was known for her feisty wittiness that she used to advocate for herself and others.  To all who knew her, she would never back down from anything or anyone and didn’t mind if her strong-willed personality “may get her in trouble.”  Nevertheless, it didn’t stop Nana from still being very wise and funny.

In April 2010, Nana relocated to Chesterfield, Virginia, from the Bronx, New York, to be closer to her living relatives.  She became a participant of Riverside PACE, an adult day center for the elderly, where she received ongoing medical care.  She also enjoyed developing lasting relationships and friendships when she attended the center daily.  Her health condition and “seasoned” age prompted this move with her oldest grandson, Trevor Wright.  She resided with him until September 2016, at which time she moved to Symphony Manor of Richmond Assisted Living & Memory Care where she resided until her health prompted a move to ManorCare Health Services-Richmond Long-Term Care Unit in October 2019.

Rosalie will be greatly missed by everyone who knew her!

Rosalie’s family would like to extend a special acknowledgment and sincere thanks to InnovAge (formerly Riverside PACE) and Symphony Manor of Richmond Assisted Living Facility who lovingly cared for her.