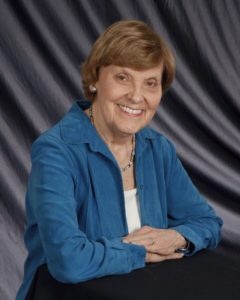 Ruth B. Hodge, 84, of Richmond, VA went to be with the Lord on July 11, 2019. She was preceded in death by her parents, John P. Ballman and Mary DeLeyla Ballman, and her brother, G. Robert Ballman. She is survived by her brother, John S. Ballman, her devoted husband, William H. Hodge, and her children, Leyla Logan (Calvin), Alan Hodge (Ann), Holly Dunham (Dan) and Sherri Gantek (Ted), her twelve grandchildren and two great grandchildren.

Ruth grew up in Evanston, IL, graduating as valedictorian from New Trier High School in the class of 1953. Ruth earned her BA at University of Michigan where she met William Hodge. Married for 60 years, they raised their four children in Annandale, VA. Growing up, Ruth’s children thrived under her watchful and loving care. She encouraged them to meet high academic and moral standards, and her life served as their model.

An education major in college, Ruth taught history for a number of years before becoming a mother. From then on, she served her family, community and church, and developed several programs to help others.

Ruth will be remembered for the heartfelt love she had for her family and friends, her kind gentle spirit and especially her trademark smile.