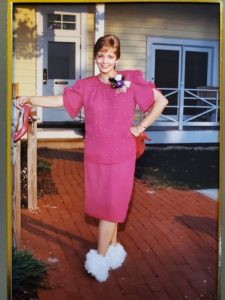 Sandra Joy Ferguson Kreiser, 76, of Richmond, passed away peacefully on Tuesday, December 24, 2019.  Sandra (“Sandy”) was known for her vivacious and charming spirit, her life-long love affair with desserts, and her mastery of all things plant and daylily related. Originally from South Carolina, she moved to Richmond in high school and married Al Kreiser in 1967, who passed away in 1989. Sandy is survived by two daughters, Nikki Scroggs and Maria Kreiser; a grandson, Alex Scroggs; a brother and sister-in-law, Donald and Margaret Ferguson; two sons-in-law, Michael Scroggs and Tom DeFee; various nieces, nephews, and cousins; and many kind friends and neighbors (including several affectionate neighborhood cats, whom she fawned over).

Having been raised by southern orphaned parents who survived the Great Depression, Sandy was thrifty by nature and also knew the loving value of a good meal or treat with family or friends. She took great pleasure in celebrating the feast of life with sweets and chocolate, fried chicken, tomatoes, and the occasional margarita or spicy Bloody Mary. The family (as well as Sandy) often joked that she could make a huge mess in the kitchen simply by preparing a hot dog, but everyone knew that she liked nothing better than to share food (aka love) with her loved ones.

Sandy loved nostalgic antiques–as well as a good bargain–and had an admirable knack for spotting abandoned curbside household items in strange places. Her kitchen collection of tomato-themed knick-knacks and other ephemera was unrivaled. She also enjoyed genealogical research and could sometimes be found on Ancestry.com or making trips to cemeteries to uncover clues from headstones. Around her Northside neighborhood in Bellevue, she was known for her green thumb and backyard full of colorful flowers and daylilies, as well as her help with beautifying local public spaces.

Sandy worked at the Country Club of VA, Investors Savings & Loan, and other businesses over the years (undoubtedly often as the convivial “social glue” of these workplaces). She loved parties, especially around the holiday season, and would frequently parade around her grandson’s house in kooky elf outfits or boisterous Christmas sweaters and antlers in order to make him laugh. As one friend said aptly, she could light up a room with her “spark.” In addition to her unabashed sense of humor, she was also capable of great kindness: in previous years, she took on the role of caretaker and companion for her own parents, Ethel and Ruthel Ferguson, as well as her dear friend William (“Bill”) Kane, Sr.

In her last months, an aggressive lung cancer overtook her, which she fought with great tenacity. Her immediate family would like to express the utmost gratitude to friends, family, hospital staff at St. Mary’s and Henrico Doctor’s, and the hospice workers at Capital Caring who were so kind and compassionate through some very trying times—particularly Christy Ferguson-Snead, Ronnie Snead, Charlotte and Jason Ford, Ola Olateju, Ann Collins, and Lynn Bowling for their loving and talented care with Sandy’s transition from this life.

The family will receive friends Thursday, January 2, from 6 – 8pm at Affinity Funeral Service, 2720 Enterprise Pkwy, Richmond, VA. A funeral service will be held at Noon Friday, January 3 in the funeral home chapel. Interment to follow at Forest Lawn Cemetery.

In lieu of flowers, memorial contributions may be made to the American Cancer Society, or any other charity of your choosing. The family also suggests that you write your congressperson and ask for something Sandy would have loved to see happen: Year-round observance of Daylight Saving Time (which, in addition to possibly improving long-term outcomes on health and energy consumption, might save some family members from the embarrassment of asking young children to change the clocks on household electronic devices). It may also preclude longstanding confusion; “But what time is it REALLY??” was an infamous biannual catchphrase of Sandra’s, which never failed to elicit affable groaning from the family.
She will be dearly missed.