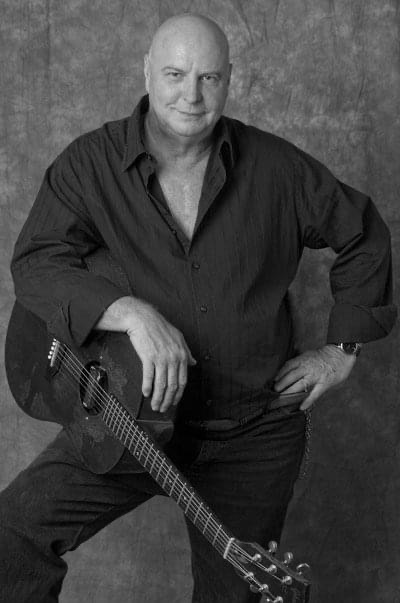 The plainest way to describe the Terry Garland sound is to say he was an “authentic bluesman.” If you were ever lucky enough to catch his solo act in a club – singing, finger-picking, foot-stomping – it’s likely you have some feel for what is suggested by that particular term.

It’s also worth noting that Garland was quite an accomplished guitarist, which, of course, made taking in one of those live performances all the more entertaining. Some, who go back far enough to remember his early days based in Richmond, in the late-1970s/early-1980s, probably still think of him as the standout rock ‘n’ roll lead guitarist he was then.

Now, following his death, we will all have to settle for listening to the precious souvenirs of his sound – the recordings of a bluesman, plying his trade in an unfettered, yet crafted, style. Since the late-1980s, as a performer, he has mostly worked alone – picture a man seated on a wooden chair playing a National steel-body guitar.

Among Terry’s music associations in Tennessee were two bands in the mid-1970s: Jubilation and Razz. Moving on to Richmond, in the late-1970s, he played in Bull, fronted by Ray Pittman. Then his four years in the Offenders, 1980-1984, put him in front of a lot of packed house rock ‘n’ roll crowds. The Offenders, fronted by Bruce Olsen, were a popular band in the region.

That time was followed by a stint in a North Carolina-based blues-rock band, the Alka-Phonics. Then came decades of solo shows, performed for audiences all over the world.

Terry was born to parents Ray and Juanita Garland on June 3,1953, in Bakersfield, North Carolina, which is in the mountainous, western part of that state. He grew up some 35 miles away in the Johnson City, Tennessee, area. On September 19, 2021, according to his wife of 22 years, Jo, he died from advanced congestive heart failure in their Richmond home.

Gregg Wetzel: “RIP Terry Garland. A true original. Terry Garland was a space invader. When Terry wanted to make a point, which was often, he would get right in your grill and hold forth using the most colorful language he could summon, just so you knew it was from the heart and, of course from his considerable knowledge of things arcane and interesting. A wonderful guitarist and performer, a true believer and a sweetheart of a guy.”

Joe Sokohl: “Here is a man who recreated Robert Johnson, Johnny Winter, early Muddy Waters, in a style that remained uniquely Terry Garland. Yet he was by no means a ‘blues scientist.’ Instead, TG melded these influences to form his unique musical vision that always struck me in my heart.”

Wes Freed: “That man could pitch a wang dang doodle, all night long. A real troubadour.”

John Moser: “I don’t think I’ve ever seen any solo performer who could hold a whole room full of people together like Terry.”

Steve Payne: “I worked with Terry very closely in Bull and Bruce Olsen and the Offenders for about five years. I kept up with him loosely over the years, but always felt we remained very close on a cosmic level. Terry was one of a kind. A real character and a wonderful friend.”

Chuck Wrenn: “It was easy to become friends with Terry Garland and we hit it off right away. I met Terry in the ’70s, when the band he was in and the band I was in shared a rehearsal space in the Fan. Later, my partners and I opened the Moondance on 17th Street and it became a top live music venue hosting local and national acts. Terry played often to sold-out crowds and became a mainstay. But I think his performance at High on the Hog 20, in 1996, outshined them all. He had great respect for the past masters, still he had a way to bring his music to today’s forefront.

“Terry Garland was a true treasure. And he sure could pitch a ‘Wang Dang Doodle’ all right! RIP, Terry Garland.”

At Terry’s request, there will not be a service or visitation. A wake will be planned in the future when it is safer for us all to gather. In the meantime, take comfort in your memories of him. He was such a vibrant and personable man and made friends wherever he went. Toast him with a good G&T. If you are so inclined, donations in his name can be made to St. Jude’s Children’s Hospital.