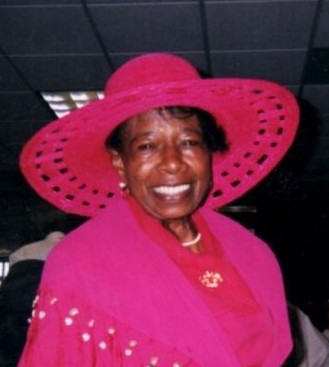 Thelma E. Stigger of Richmond, VA, a loving mother, sister, aunt, grandmother, and friend, died on August 2, 2018. She was born June 20, 1926, in Surry County, VA and was the seventh child of Clarence and Adeline Watson.

In 1960, Thelma moved her family from Richmond, VA to Plainfield, NJ. A few years later, she raised her children alone as a divorcee. She was a very skilled beautician and seamstress. In time she became an entrepreneur and opened the “Unity Beauty Shop” and later purchased a house in South Plainfield, NJ. Through the years, she produced a number of dinner-dances and featured her fashion creations as entertainment. To sum it up, she did it all! Thelma retired in 1998 and returned to Richmond, VA to be close to her family.
In 1995, Thelma was baptized as one of Jehovah’s Witnesses at the Jersey City Assembly Hall in NJ. She was a member of the Southside Congregation of Jehovah’s Witnesses in Richmond, VA and she served Jehovah God faithfully until her death.
There are many cherished loving memories of her: wisdom and encouragement (seek peace and pursue it); hospitality (you always felt like family at her home); good cook (homemade rolls and famous punch); impeccably dress and grooming (everything had to match and the Hats!!) Oh, my, not to mention that beautiful smile.
She is survived by her sons: Willie Watson of Oakland, CA and William Edmondson (Joni) of Dayton, OH; daughters: Nannette Edmondson of Richmond, VA, Paulette Grant of Hempstead, NY, Delores A. S. Stigger of South Amboy, NJ, and Irene Edmondson of Naugatuck, CT; sister: Addie Mae Richardson of Surry, VA; grandchildren: Camil Washington (Shawn) of Lanham, MD, Rufus Grant of Baltimore, MD, Shjuan Grant of Hempstead, NY, Maya Edmondson of Arlington, VA, Cory (Stacey) Edmondson of Lawton, OK, Courtney Edmondson of Dayton, OH, and Shree Evans of Hampton, VA; nine great-grandchildren; two great-great-grandchildren, and a host of family and friends.
Thelma was predeceased by her parents: Clarence and Adeline Watson; brothers: Robert N. Watson, Clarence Watson, Jr., Pernell Watson, and Kermit Watson; sisters: Amelia Jones, Louise Spratley, Frances Mason, and Gracie Fitts.
Thelma Stigger was loved by many who knew her and will be greatly missed by her family and friends.

A memorial service will be held on Friday, August 10, 2018 at 2 pm at Kingdom Hall of Jehovah’s Witnesses, 5720 Swanson Road. Richmond, VAa