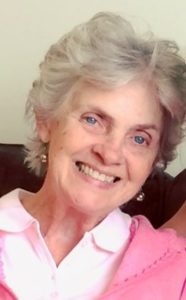 She is survived by her husband of 58 years, Robert E. Holt, Sr.   She is lovingly remembered by her two sisters, Christine and June; her three sons, Robby, Esko, and Joseph; 5 grandchildren Alyson, Camden, Lukas, Esko Alex, and Addisyn.

She will always be remembered for her caring heart and beautiful smile.  A memorial service to be announced at a later time.